The police claim the 28-year-old man ran a sand mining business and was shot dead on Sunday by a police team after he had had fired at an inspector who had seized his truck used for sand mining a few days ago.

Pushpendra Yadav who was shot dead by the police in an alleged encounter.

Samajwadi Party chief Akhilesh Yadav will visit Uttar Pradesh's Jhansi today to meet the family of a 28-year-old man, who was shot dead by the police earlier this week in an alleged encounter. While the police say the man had opened fire at an officer, his family claims he was killed as he refused to pay a bribe. The incident has sparked protests in the area.

The police claim Pushpendra Yadav ran a sand mining business and was shot dead on Sunday by a police team after he had had fired at a police inspector who had seized his truck used for sand mining a few days ago.

The man had escaped after firing at the police at an intersection but his car was intercepted by them a few hours later. The police claim he refused to surrender and tried to engage again and that's why he was shot. 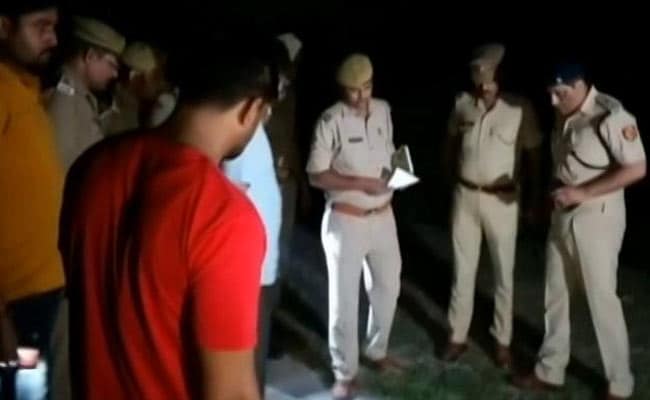 The police claim the man refused to surrender and tried to engage again and that's why he was shot.

His family, however, has alleged that the police officer in charge of the area, Dharmendra Chauhan, was demanding Rs 1.5 lakh as bribe to release his truck. He murdered Mr Yadav after he threatened to expose him, they said.

"He had given some money earlier. But the inspector was asking for more money. He was shot dead by the police when he refused to pay money. I want justice," Pushpendra Yadav's wife told NDTV.

Uttar Pradesh Police tweeted this morning threatening police cases against what they called were "false reporting". But a blatant discrepancy has emerged in the versions of the inspector who carried out the encounter and the police chief of Jhansi. Speaking to reporters on the night of the encounter, the district's police chief OP Singh said the inspector who shot Pushpendra Yadav was returning from leave and was travelling alone in a private car. "The inspector was on leave and he was returning alone driving his car. He says a local person called him and wanted to meet. He was alone in a private car and went to meet this person but he was fired at," Mr Singh said.

But just hours later, the inspector gave a different version to the media from hospital. "I had left the police station for patrolling. A constable and I were in a private car. The time was around 9 pm. As we reached an intersection, a man came forward and fired at me," inspector Chauhan said. When asked about reports that he was on leave, the inspector said, " I was on leave but I came to the police station and then went on patrolling."

The police cremated Pushpendra Yadav on Monday amid protests from his family members, who refused to perform the last rites demanding that a murder case be filed against the personnel involved in his encounter.

Senior officers have promised his family that a probe will be launched into the encounter. However, no case has been filed so far against the police personnel involved.

The BJP had hit out at the Samajwadi Party chief on Monday.

"It was an encounter. But Akhilesh has to go to the person's house because he is in love with the sand mining mafia and casteism. But he does not care how the sand-mining mafia should be eradicated. This is precisely why he was thrown out by the people," senior leader Sidharth Nath Singh had said on Twitter.

On Tuesday afternoon, UP Police tweeted a list of cases filed against Pushpendra Yadav in the past, to support their claims of his criminal past.  But an analysis of the five cases reveals they were to do mostly with village-level disputes and none of the cases related to mining or any major sections of the law.

Over 100 people have been killed in encounters by UP Police since Yogi Adityanath took over as the Chief Minister in 2017. His government had come under severe criticism from the opposition over the encounters.