Amazon CEO Jeff Bezos introduced a fleet of electric-powered delivery rickshaws with a video on Twitter. 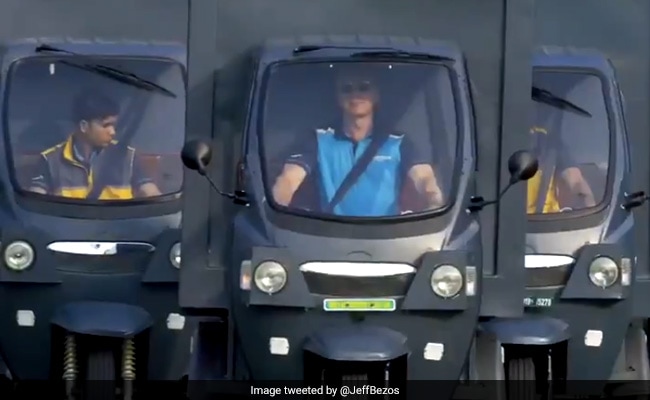 Notwithstanding an apparent snub from the Indian government, Amazon chief Jeff Bezos' charm offensive for India is showing little signs of slowing down. This morning, the American billionaire, back home after a three-day visit to India last week, tweeted a video announcing the rollout of a fleet of electric-powered delivery rickshaws.

Though details of the plan are missing at the moment, the video shows Mr Bezos driving one of the charcoal electric rickshaws in peppy promo video a aimed squarely at social media with an environment-friendly message.

Only on Friday, the Amazon boss on Friday had promised to create a million new jobs in India in a farewell love letter to the country, after ending a tough visit that reportedly included a refusal by Prime Minister Narendra Modi to grant an appointment.

Hundreds of small traders staged protests during his visit to India last week, which came as anti-trust authorities launched a probe into the e-commerce behemoth and its main rival Walmart-owned Flipkart.

Union Commerce Minister Piyush Goyal dismissed Mr Bezos's announcement that Amazon would invest $1 billion as "not a favour", and a senior BJP leader hit out at his ownership of The Washington Post, a newspaper often seen as critical of PM Modi.

"I fall more in love with India every time I return here. The boundless energy, innovation, and grit of the Indian people always inspire me," Mr Bezos said in his farewell letter to the country posted on Amazon's India website on Friday.

The $1-billion investment will "digitize micro and small businesses in cities, towns, and villages across India", he said, vowing Amazon would export $10 billion of Indian-made products annually and create one million new jobs by 2025.