JDU MLA from Nawada, Kaushal Yadav, got tired and lied down on the carpet, following which his supporters started to massage his legs. 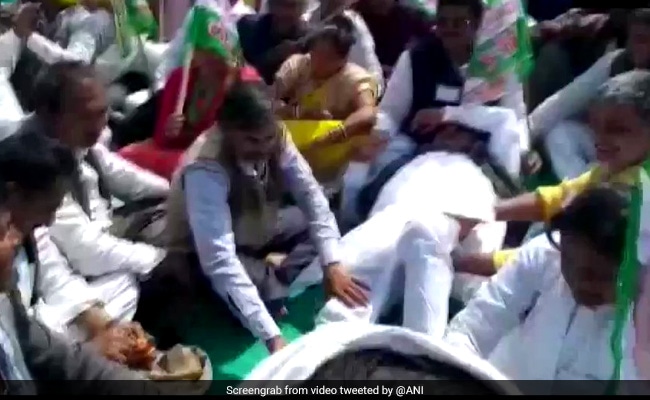 JDU MLA Kaushal Yadav was attending a rally in Patna when he was massaged.

In what is likely to bring embarrassment for the party leadership, a JDU MLA was given a massage in full public view by his supporters at Patna's Gandhi Maidan on Sunday.

Party workers and supporters from all the across the state thronged to the iconic maidan to listen to JDU chief and Bihar Chief Minister Nitish Kumar.

JDU MLA from Nawada, Kaushal Yadav,  got tired and lied down on the carpet, following which his supporters started to massage his legs.

At the rally, Bihar Chief Minister Nitish Kumar said that the Janata Dal (United) will fight the upcoming state elections in coalition with the National Democratic Alliance (NDA) and will win more than 200 seats.

"We will contest the Bihar Assembly Elections in coalition with NDA (National Democratic Alliance) and win more than 200 seats," Kumar said at a meeting of the party workers in Patna.

Bihar is scheduled to go for Assembly polls in the second half of this year for the 243 seats in the state Assembly.