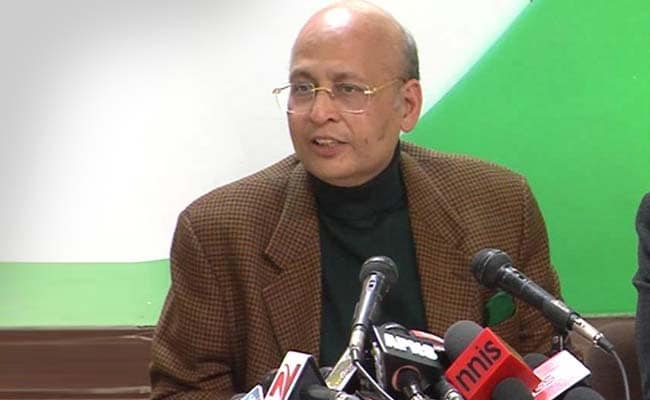 The Congress today was relentless in its efforts to discredit former union minister Jayanthi Natarajan, who quit the party with a strong attack on Vice President Rahul Gandhi.

"It is an 'image bacchao andolan'  (image-saving mission) by her, said Congress leader Abhishek Manu Singhvi. "Not has she once orally or in writing articulated these thoughts. They are hypocritical and opportunistic," he added.

He also alleged that Ms Natarajan's claims which erupted publicly just before Delhi votes suggest a deeper political conspiracy.  Mr Singhvi said his former colleague appeared to be acting at the behest of "new political masters who may have got evidence against her". He was referencing reports that some decisions taken by Ms Natarajan as Environment Minister may be investigated by the CBI.

Ms Natarajan has alleged that she was made to resign as Environment Minister in December 2013 as punishment for refusing clearances to projects that would damage the environment. She said she followed her party's line and instructions from Mr Gandhi, and his mother, Sonia, to prioritize preserving the environment.  But she said that Mr Gandhi then turned on her and appeared to blame her at a meeting with top industrialists for creating "bottlenecks" in development.

Promoted
Listen to the latest songs, only on JioSaavn.com
Ms Natarajan, who was with the Congress for more than 30 years, said she had outlined these concerns in a detailed note to Mrs Gandhi in November but received no response.

The Congress was also dismissive of her claim that she was pressured by the party's top leadership to attack Narendra Modi, then the BJP's prime ministerial canddaite, over the controversy known as Snoop-Gate, which centred on whether the Gujarat police illegally spied on a woman architect at the behest of Mr Modi. "If she had a problem, she should have resigned then," said Mr Singhvi