"Might Hit You...": Jaya Bachchan To Reporter On Crimes Against Women

Earlier this week, during a debate in parliament over the rape and murder of a veterinarian in Telangana, Ms Bachchan had called for lynching the culprits. 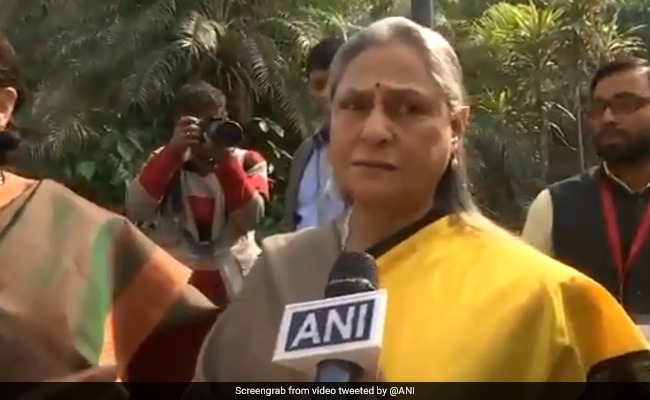 Jaya Bachchan slammed the UP government over law and order situation.

Reacting on the spate of crimes against women which have triggered a nationwide outrage, Rajya Sabha MP Jaya Bachchan on Thursday vent out her frustration, claiming she is not being allowed to raise such issues in parliament. The leader, who was criticised by a section of social media users on her remark that rapists should be "lynched", told a reporter in a lighter vein that she might hit him in anger.

A reporter, during an interview outside parliament, asked Ms Bachchan what she wanted to say on the Unnao incident in which a rape survivor was set on fire while she was going to a local court. She replied: "What happened was very bad. What happened in a police station in Chitrakoot...It is a matter of shame that we are not able to raise these issues in parliament... all that is happening these days...if we use tough words then it is said we should not have used such words... these are our feelings... sometimes I feel I might hit you in anger (in a lighter vein)," she said.

Earlier this week, during a debate in parliament over the rape and murder of a veterinarian in Telangana, Ms Bachchan had called for lynching the culprits. "These types of people (the rape accused in the Telangana case) need to be brought out in public and lynched," she had said.

The Samajwadi Party leader has slammed the BJP-led Uttar Pradesh government over law and order.

"Who is safe in Uttar Pradesh? Nobody is safe. You will be surprised if I tell you about incidents in UP," she said today.

The 23-year-old woman, who had filed a rape case against two men from her village in March, is critical after she was set on fire this morning by five men outside her village when she was headed to a local court for hearing. All five men, including the two rape-accused, have been arrested, said police. The survivor has suffered 90 per cent burn injuries.