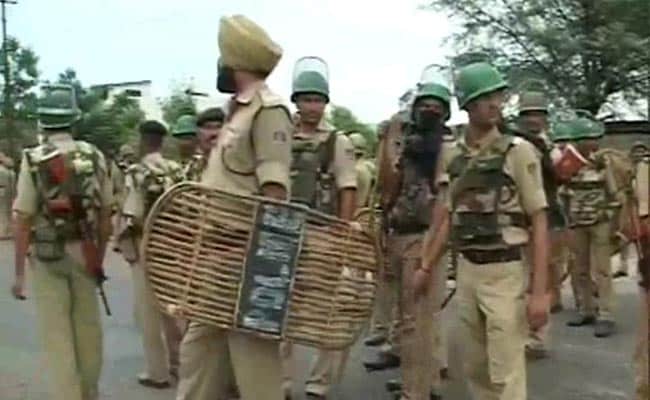 Jammu, Jammu and Kashmir: Sikh protesters have blocked the Jammu-Pathankot National Highway over the removal of posters of Sikh separatist leader Jarnail Bhindrawale, put up in the Gardhigarh area ahead of his death anniversary on Saturday.

There is curfew in Gardigarh and Internet services for both landline and mobile phones have been suspended in Jammu. Business establishments and some schools remained closed in the region as streets wore a deserted look.

Locals allege the posters were removed by the police, triggering a spate of protests and clashes, which have now spread to areas in the Kashmir Valley like Srinagar, Baramulla and Tral where members of the Sikh community carried out protests.

"I appeal to the people, especially the leaders of the community that they must maintain peace and communal harmony because it (protests) is not in the larger interest of the people of Jammu and Kashmir and India," said Nirmal Singh, Deputy Chief Minister, Jammu and Kashmir.

On Wednesday, a sub-inspector was stabbed when a mob attacked a police party with sticks and knives while the police allegedly tried to remove a poster in Gardigarh.

One person was killed and 40 others injured on Thursday after clashes between Sikh protesters and the police in Gardigarh. The Army staged flag marches in parts of Jammu last night.

"Miscreants are behind the violence and protests, and government is doing its best to restore peace," said Rafi Ahmad, a senior member of the ruling People's Democratic Party (PDP) in the state.

"We are not at fault. A poster was put up here, why did they remove it? What was in that? For the last 31 years we are paying tributes, a young man got killed here, why did he die? Where from did the police come suddenly?" said Kanwaljeet Kaur, a resident of Gardhigarh.

Protesters allege police have picked up many local boys, and are demanding their immediate release. They are also demanding an apology from senior police officers for hurting their sentiments.