The facility at Manasbal lake was abandoned in 1989 due to the deterioration of the security situation in Jammu and Kashmir. 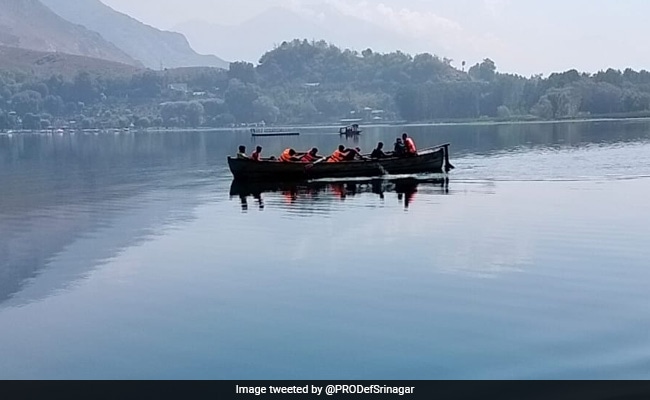 The naval training area in Manasbal Lake has been revived after a gap of 33 years, officials said.

The Indian Navy has revived its training area at the Manasbal lake in Jammu and Kashmir's Ganderbal district, 33 years after it was closed following the eruption of terrorism in the erstwhile state.

The facility at the Manasbal lake in the central Kashmir district was excellent for the naval training of the National Cadet Corps (NCC) in Jammu and Kashmir. However, due to the deterioration of the security situation, the site had to be abandoned in 1989 and the training areas were shifted to Mansar Lake in Jammu, officials said.

With an improvement in the security situation in Kashmir, the naval training area has been successfully revived after a gap of 33 years, they said.

The officials said that a suitable camping site along with adequate infrastructure has been provided by the Manasbal Development Authority on the lakefront and two naval training boats have been shifted here from Mansar.

Speaking to reporters at the training centre, Group Commander NCC Group Srinagar Brigadier K S Kalsi said it is a momentous occasion and a red-letter day for the NCC in the Kashmir valley.

"It is after a gap of 33 years that NCC training activities of the naval wing are restarting in this beautiful location of Manasbal lake...100 NCC cadets including girls from various colleges of Jammu and Kashmir are participating in the camp," Brigadier Kalsi said.

He said the NCC is a major organ of nation-building. It aims to train the youth of the country to inculcate discipline among them and make them responsible citizens.

"We also train them to join the armed forces," he added.

The NCC started its activities in Kashmir in 1965 but the naval centre at Manasbal was closed in 1989 due to the security situation, Brigadier Kalsi said.

After the improvement in the situation, the centre has been revived, he said. "Now, we are ready to start training and reactivate this area," he added.

The cadets will be trained in various activities like boat pulling, sailing, signalling and ship modelling.

These activities were earlier carried out in the Mansar lake area and the cadets had to move from Kashmir to Jammu. Frequent closures of the highway caused a lot of inconveniences.

"It was a demotivating factor. Now, when Manasbal is available, we are sure and hopeful that cadets of the Kashmir valley will immensely benefit from this beautiful location," Brigadier Kalsi said.

This beautifully located training facility will motivate the local youth to join the NCC, he said.

He said 100 NCC cadets from across Jammu and Kashmir are taking part in the first training at the facility. The camp will run till September 26 and prepare the cadets for the forthcoming national-level NCC camp at Visakhapatnam, Andhra Pradesh, which will commence on October 2.