GC Murmu, an IAS officer of 1985 batch from Gujarat, is probably the first official to be appointed lieutenant governor while he is still in active service. The expenditure secretary was due to retire at the end of the month. 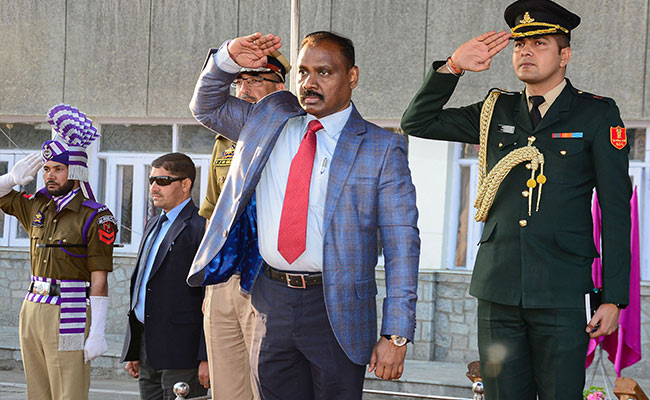 RK Mathur took the oath of office in Leh and GC Murmu in Srinagar later in the day.

RK Mathur, a 1977 batch IAS officer from Tripura and a former defence secretary, was sworn in by Jammu and Kashmir High Court Chief Justice Gita Mittal at the Sindhu Sanskriti auditorium in the Ladakh capital.

The function was attended by officials of the Leh and Kargil hill councils, army and paramilitary forces, religious leaders and the general public.

The chief justice then flew to Srinagar to administer the oath of office to 59-year-old GC Murmu at the Raj Bhawan.

GC Murmu, an IAS officer of 1985 batch from Gujarat, is probably the first official to be appointed lieutenant governor while he is still in active service. The expenditure secretary was due to retire at the end of the month.

The warrant of appointment of GC Murmu was read out by Chief Secretary BVR Subrahmanyam. BJP's Lok Sabha MP Jugal Kishore and Rajya Sabha MP and PDP member Nazir Laway were among the over 250 guests present at the function.

GC Murmu, who belongs to Odisha, is a postgraduate in political science. He worked closely with Prime Minister Narendra Modi as his additional principal secretary during his tenure as chief minister.

RK Mathur, who turns 66 next month, said a lot of development activity needs to be carried out in border areas.

"Already, the government is implementing several programmes in the region. The priorities for Ladakh will be set in the new regime in consultation with the public and hill councils," an official spokesperson quoted him as saying.

He said his experience of working in the backward and border areas in the capacity of the chief secretary of Tripura and the defence secretary will be useful.

While union territory of Jammu and Kashmir will have an elected legislative assembly and council of ministers headed by the chief minister for a period of five years, Ladakh will be directly governed by the Union Home ministry through the lieutenant governor.

Both the union territories will have a common high court.

Government employees of the new union territories will start getting salaries and other benefits according to the recommendations of the seventh Pay Commission.

This is the first time that a state is being converted into two Union Territories. The total number of states in the country will now be 28, while the total Union Territories will go up to nine.

The Constitution of Jammu and Kashmir and the Ranbir Penal Code have ceased to exist from Thursday, when the nation celebrates ''National Unity Day'' to mark the birth anniversary of the country's first home minister Sardar Vallabhbhai Patel who is credited with the merger of over 560 states into the Union of India.