Uttar Pradesh has the lowest coverage at 13.75 per cent, according to official data. 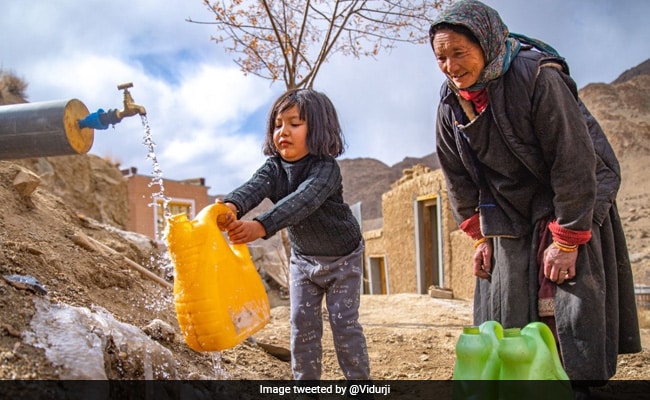 Of the 19.13 crore rural households in India, 9.59 crore of them have access to functional tap water.

Even though the government's flagship Jal Jeevan Mission has on an average covered 50 per cent rural households in the country, Uttar Pradesh, Chhattisgarh, Rajasthan and Jharkhand continue to have below 25 per cent coverage of functional tap water connection.

Uttar Pradesh has the lowest coverage at 13.75 per cent, followed by Jharkhand at 20.01 per cent, Chhattisgarh 23.26 per cent and Rajasthan at 24.58 per cent, according to official data.

The government's flagship initiative aims to provide safe and adequate drinking water through individual household tap connections by 2024 to all households in rural India. Of the 19.13 crore rural households in the country, 9.59 crore of them have access to functional tap water connections.

Goa, Telangana, Andaman and Nicobar Islands, Dadra and Nagar Haveli and Daman and Diu, Puducherry and Haryana have already achieved 100 per cent household water connections, while Punjab, Gujarat, Himachal Pradesh and Bihar have covered more than 90 per cent households and are progressing fast towards attaining the status of 'Har Ghar Jal', according to official data.

On Uttar Pradesh, Chhattisgarh, Rajasthan and Jharkhand, a senior official said it was a matter of concern and the Centre was working with states to resolve the issues.

The official said even though coverage was low in these states, groundwork for establishing functional tap water connections was at an advanced stage and results would soon be visible.

According to official data, tap water supply has been given to 8.6 lakh schools, 8.89 lakh anganwadi centres, and 3.51 lakh gram panchayat offices and CHCs.

Among states and union territories, Jharkhand has the lowest coverage of tap water connections in schools and anganwadi centres at 17.99 per cent and 4.57 per cent, respectively.