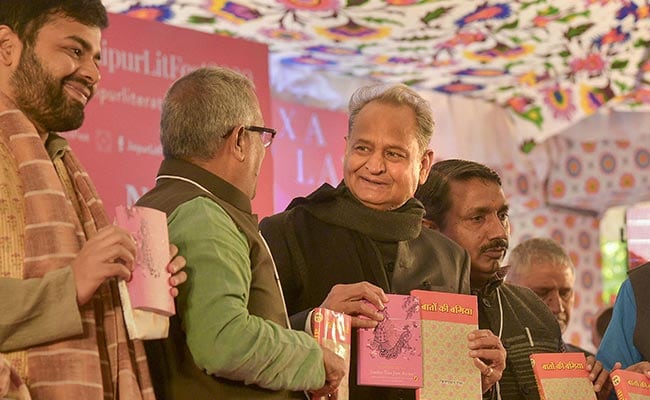 Jaipur Literature Festival is the pride of Rajasthan: Ashok Gehlot

The Jaipur Literature Festival (JLF) is the place where thinkers across the world come and do "Kaam Ki Baat" along with "Mann Ki Baat", said Rajasthan Chief Minister Ashok Gehlot on Thursday during the inauguration ceremony of the annual literary event.

"JLF is the pride of Rajasthan, it has carved a place for itself in the world. Everyone is in awe of it. I hope the festival will inspire the new generation. It is being talked about across the world. All the literary people discuss this festival, they feel at JLF they will get a chance to say their "Mann ki baat" as well as "Kaam ki baat".

The festival, now in its 13th edition, was also described by Mr Gehlot as "pride of Rajasthan" and "Sahitya Ka Mahakumbh". During the event, he also paid tribute to Rajasthani poet Vijaydan Detha, and unveiled an English translation of the late poet's works -- "Bijji: Timeless Tales from Marwar".

Speaking at the inaugural session, festival co-director and author William Dalrymple told the audience that the Jaipur Literature Festival has now formally become "the largest literary festival" in the world.

"We had around five lakh people who attended the event last year. At a time when people say love for literature is dying, we are a proof that it isn't. Literature is alive and loved and the teeming crowds at the JLF is a proof of it.

"We have inspired others as well, over 300 festivals have taken off in an extraordinary way because of JLF. Extraordinary popularity of Jaipur Literature Festival is also partly because of India's rich oral tradition," he said.

Sanjoy Roy, festival producer, said that literature was the only thing that can push against the "spread of a narrative of hatred", the one that the country is witnessing today.

"In the land of Gandhi, we are faced with a situation where we are seeing the spread of a narrative of hatred. Literature is one thing that can stand against it, and so can the art," said the managing director of Teamwork Arts, the organisers of the festival.

He also urged the people to raise their voice, asserting that it was not the time to be silent anymore as "tribalism grows across the world".

"It's not the time to be silent anymore, if we all have to speak we must speak with one voice, a voice full of empathy and love for each other. Even as tribalism grows across the world and countries build walls around them, we have to remember that each one of us is a human being, together here on this earth for a common cause of humanity," he added.

The latest edition of the Jaipur Literature Festival will host over 250 speakers including authors, scholars, actors, humanitarians, business leaders, and sports persons from across the world. The festival will witness speakers of 15 Indian and 35 international languages participate in stimulating debates on an array of topics including artificial intelligence, environment, art, culture, history, cinema, and music.

The literary extravaganza will come to a close on January 27.