A seven-judge bench headed by the Chief Justice of India JS Khehar gave reasons for sending the retired Calcutta high court judge to jail for six months for contempt of court. 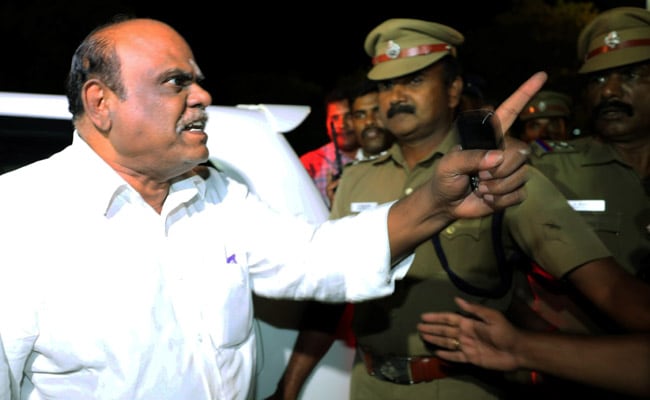 Supreme Court said that there must be a system other than impeachment to deal with judges like CS Karnan.

New Delhi: Retired Justice CS Karnan's conduct that led the Supreme Court to send him to jail for six months for contempt underscores the need to revisit the way judges are selected, two senior Supreme Court judges have ruled. The judges also noted that a process should be in place to deal with such cases in future.

In a detailed judgment released by the Supreme Court, a seven-judge bench headed by the Chief Justice of India JS Khehar gave reasons for sending the retired Calcutta high court judge to jail for six months for contempt of court. The judge was reportedly on the run and arrested from Tamil Nadu's Coimbatore after he retired last month, nearly six weeks after the Supreme Court sentenced him to jail.

The seven judges said Justice (retired) Karnan, who had also 'sentenced' the top court's five judges in between, had committed the "grossest and gravest" act by his utterances and turned the judicial system into "a laughing stock".

Two judges of the top court, Justice J Chelameswar and Justice Ranjan Gogoi, however, added that there was system's failure to assess the personality of Mr Karnan when he was appointed as a Judge of the Madras High Court.

Justice J Chelameswar had dissented in the Judges appointment case and upheld the validity of the National Judicial Appointment Commission set up under a parliamentary enactment. But four other judges had quashed the judicial appointment commission.

In their separate judgment, Justice Chelameswar and Justice Gogoi observed that Justice Karnan's conduct had been "controversial" ever since he was elevated to the bench. "Obviously, there is a failure to make an assessment of the personality of the contemnor at the time of recommending his name for elevation," the two judges ruled, making it clear that they did not intend to "point fingers" at individuals.

Instead, the judges said they only intended to highlight the systemic failure that there was no proper procedure to make this assessment.

The judges didn't come up with the mechanism that would keep someone like Justice Karnan out of the judiciary. That mechanism, they said, was something that could be identified only after a debate by lawyers, judges, the government and civil society. "But the need (for a new mechanism) appears to be unquestionable," the judgment said.

The court also said that there must be a system other than the cumbersome process of impeachment to deal with errant judges such as Mr Karnan.

"This case highlights two things, (1) The need to revisit the process of selection and appointment of judges to the constitutional courts, for that matter any member of the judiciary at all levels; and (2) the need to set up appropriate legal regime to deal with situations where the conduct of a Judge of a constitutional court requires corrective measures - other than impeachment - to be taken," the two judges wrote.

On May 9, the court had ordered a six-month jail term to Justice C S Karnan for levelling corruption charges against Judges without evidence and writing to constitutional authorities. Justice (retired) Karnan appeared once in the top court but skipped other hearings.
Comments
CS KarnanJailed judge KarnanJS Khehar