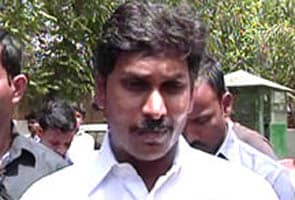 New Delhi: Former Congress MP Y S Jaganmohan Reddy will undertake a day-long fast in the national capital on Tuesday to protest against the "injustice" meted out to Andhra Pradesh in the Krishna Water Disputes Tribunal award.

The former Congress MP from Kadapa, who had resigned from the party on November last, arrived here late Monday night by a special train along with his supporters and farmers.

Jagan, who has announced his plans to launch a new party, will sit on a fast from 10 am at Jantar Mantar along with his supporters.

Jagan's camp claims that at least a dozen Congress MLAs and few MPs will participate in the fast. The 38-year-old son of former AP chief minister late Y S Rajasekhara Reddy had
quit Congress on November 29, 2010 alleging "humiliation" by the party High Command.

Sources said the objective of the fast is to highlight farmers' plight who suffered heavily due to cyclones, untimely rains and floods over the last one year and possible adverse impact of the Krishna Water Disputes Tribunal on the state.

Jagan had last month held a 48-hour fast at Vijayawada demanding hike in compensation announced by the government for the rain-hit farmers.

Political parties in Andhra Pradesh are not happy with the Krishna Tribunal Award and claim that state will now have to be at the mercy of upper riparian state Karnataka.