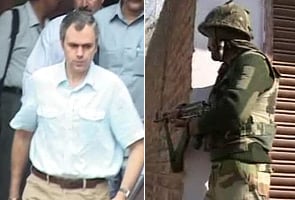 Srinagar: Jammu and Kashmir is on security alert ahead of US President Barack Obama's India visit early November. State Chief Minister Omar Abdullah will preside over a Unified Headquarters meeting in Srinagar later on Monday, to take stock of the security measures.

Top security sources have told NDTV that the meeting will focus on specific counter-strategies and measures to prevent terrorist attacks in populated areas.

Intelligence reports indicate a possibility of an increase in violence in J&K ahead of President Obama's visit to raise the Kashmir issue.

Reports suggest well-trained terrorists have managed to sneak into J&K with the task of carrying out suicide attacks. Some 80-100 well-armed terrorists are waiting along the Line of Control (LoC) to infiltrate.

The Army has further tightened the three-tier security grid.

And as we get those reports of terrorists waiting to crossover at the LoC, there has been a major ceasefire violation in the Krishnaghati sector of Jammu's Poonch district last evening, killing one Army jawan. (Read: Jawan injured in Pak firing dies in Poonch)

Pakistani troops fired rockets and used heavy machine guns, the firing continued for nearly an hour. This is the third ceasefire violation by Pakistan this month in Poonch sector.
Comments
Omarsecurity meetObama visit