"No Invitation So Far": J&K Congress Chief On All-Party Meet With PM Modi

Jammu and Kashmir Congress president GA Mir said dialogue with stakeholders is the only way to address anger among the masses in a democratic set up for peace, prosperity and development. 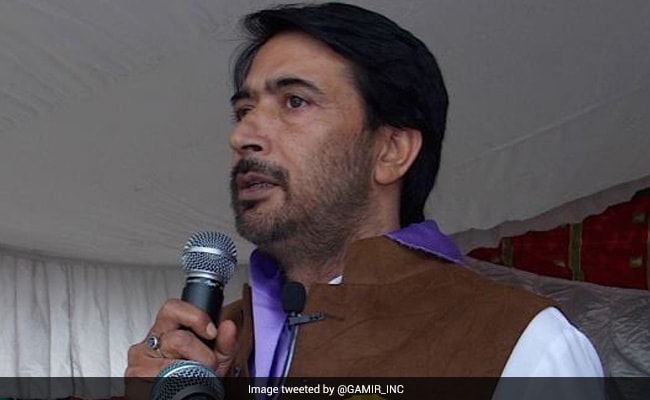 We have not received any invitation, said Jammu and Kashmir Congress president GA Mir(FILE)

Jammu and Kashmir Congress president GA Mir on Saturday said his party has not received any invitation from the Centre for participation in a proposed conference of mainstream political parties from the Union Territory in New Delhi next week.

However, Mr Mir said such a step, if taken, is welcome as dialogue with stakeholders is the only way to address anger among the masses in a democratic set up for peace, prosperity and development.

Prime Minister Narendra Modi is likely to chair a meeting with all political parties from Jammu and Kashmir on June 24 as part of the Centre's initiative to bolster political processes, including holding assembly elections, in the union territory, officials had said on Friday.

The meeting, the first such exercise since the Centre announced the abrogation of Jammu and Kashmir''s special status and its bifurcation into union territories in August 2019,is likely to be attended by Union Home Minister Amit Shah and other central leaders.

"We have not received any invitation (from the Centre) so far. We have no knowledge of who is being invited to the roundtable conference by the Centre," Mr Mir told reporters on the sidelines of a party function here.

He said the Congress stand is crystal clear that whenever there is conflict, anger and a political or economic issue, dialogue is the only way forward in a democratic set up as was being followed by the Congress to resolve the problems in the country.

"Talk at any level, invite anyone, there should be peace, development and ample job opportunities for the youth. The Congress will appreciate this way of dealing by the Centre," Mr Mir said.

Responding to another question about how he sees PM Modi's outreach to political leadership in Jammu and Kashmmir, the Congress leader said it is always good.

"He should have done it right from the beginning, before the development on August 5 2019. This is the way the government should function. We are disappointed and angry because we were not taken on board. The primary responsibility of Parliament is to frame laws but when the method of democracy is sidelined, questions are set to arise," he said.

The central government took an important decision regarding the Union territory but it would have been better had it waited for a popular government in the erstwhile state.

"In the absence of the state assembly, the central government should have convened an all-party-meeting to take all the stakeholders on board, such a situation (anger among masses) would have been avoided," he said.

Mr Mir, however, said it is better late than never. "If they have understood after two long years that peace in the region is imperative and the land and its people are part of the country, it is good."

"As a national leader, the prime minister should see that if there is anger among the people in any part of the country, he should try to address the problem," he said.

The Congress leader said if the conference materializes it is the same pattern initiated by former prime minister Manmohan Singh during the first UPA government at the Centre and taken forward by BJP leader and former prime minister AB Vajpayee who had once said that there were some issues which should be resolved outside the constitution of the country and attracted praise from all sections of the people.

Mr Mir said both sides, the government and participants, should attend the proposed conference with an open heart to take Jammu and Kashmir towards peace, progress and prosperity for the next 200 years.

"If Modi Sahib has taken an initiative, both, he and the participants, should sit on the table with an open heart and away from the static position. In such a situation, there is a possibility that something which is far better than the previous arrangement can emerge," he said.

Without naming anyone, Mir said some politicians started talking of extension of Article 371 and 372 to Jammu and Kashmir post abrogation of Article 370 in August, 2019, but the participants should give it a consideration to reach for such a solution that can last for the next 200 years and guide the youth and people to prosperity.