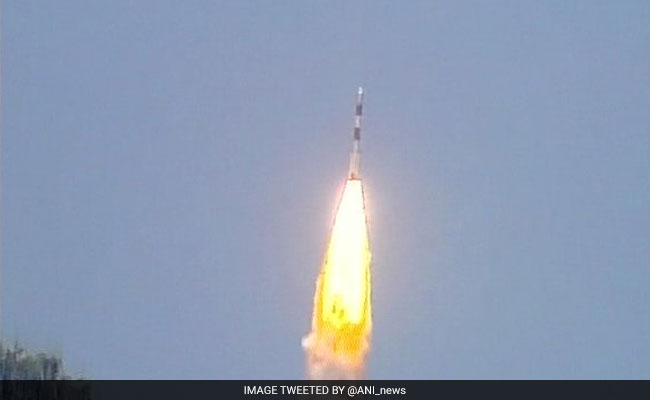 The 22 machines being launched next week include an Earth observation satellite to capture light invisible to the naked eye. (Representational Image)

India's space agency will launch a record 22 satellites on a single rocket as it tries to ease a global backlog and demonstrate the ability to compete with commercial spaceflight companies run by billionaires Elon Musk and Jeff Bezos.

Satellites from the United States, India, Canada and Germany will enter orbit after a scheduled June 20 liftoff from the Sriharikota barrier island along the southeast coast, the agency's chairman, A.S. Kiran Kumar, said in an interview in Bengaluru. Most of the machines will observe and measure the Earth's atmosphere, with another from an Indian university helping provide service for amateur radio operators.

The business of putting satellites into space is surging as phone companies, Internet providers, airlines and even carmakers seek bandwidth for communications. The resulting backlog is creating opportunities for Musk and Bezos, who are privatizing what was once a government-only industry by testing reusable rockets to help reduce costs.

To keep pace, India is touting its traditionally low-cost program along with achievements such as putting an orbiter around Mars and building a space-shuttle prototype.

"Unless you keep yourself abreast and look to the future on how to make things better, how to make it more cost-effective, you run the risk of becoming irrelevant," said Kumar, 64, chairman of the Indian Space Research Organisation. "So you have to take care of these threats."

The 22 machines being launched next week include an Earth observation satellite to capture light invisible to the naked eye. It is the biggest single launch by India, trailing Russia's 33 in 2014 and NASA's 29 the year before.

There were 208 satellites launched in 2014, almost double the amount the year before, as countries such as India and Indonesia try to bring phone services to most of their people for the first time. India is the world's second-largest smartphone market after China, and that demand is helping fuel what may be a 30 percent increase in liftoffs globally during the next five years.

India has about 35 satellites in orbit for broadcasting, navigation, scientific exploration and weather monitoring, yet it needs double that amount, Kumar said.

"We need to make more launches and we have to build more satellites," he said on June 9 in an office dotted with scale models of Indian rockets and satellites. "So we are trying to make that happen. We're reaching a stage where every month we are having a launch."

The South Asian country sent its first rocket to space in 1963 and its first satellite in 1975. An unmanned mission to the moon that ended in 2009 showed water formation there may be occurring. The Mars probe beat China to the red planet after an almost yearlong voyage.

India last month successfully launched a scale model of a reusable spacecraft, a project that in time could pit the nation against Bezos and Musk in the race to make access to space cheaper and easier. The country also injected a probe into Mars' atmosphere in 2014 for just $74 million, about 11 percent of the cost of the U.S.'s Maven probe.

To meet the increasing competition from private industry and other nations, India needs to expand its space program, said Ajey Lele, a New Delhi-based senior fellow at the Institute for Defence Studies and Analyses.

"Right now, India has got only one launch site," Lele said. "So, it needs to develop another site within India or maybe somewhere else."

Musk's Space Exploration Technologies Corp., after three successful landings of the first stage of the Falcon 9 rocket since April, plans to start reusing rockets as soon as September, the billionaire said. Blue Origin has shot off and landed the same rocket three times, and Bezos said low-cost launches are the missing pieces for space travel.

India takes that as a challenge, said Kumar, adding customers today are looking for the most cost-effective launches with short turnaround times.

"If tomorrow, Elon Musk is able to do what he is working on today, he can launch every day, every week, every month," he said. "And obviously, if he is able to do that, he will capture a large market."

Kumar, who joined ISRO in 1975 and since has helped design satellites and worked on the Mars mission. India also is collaborating with NASA for the 2020 launch of a radar system to detect small changes in the Earth's surface, potentially benefiting climate-change studies and helping farmers with crop rotation and flood monitoring, Kumar said.

"If you don't have a capability, you have to build that capability," he said. "It is not trying to emulate, but you also have to be relevant."