The 30-year-old Indian woman, hailing from Idukki in Kerala, was among those killed in a rocket attack by a Palestinian Islamist group. 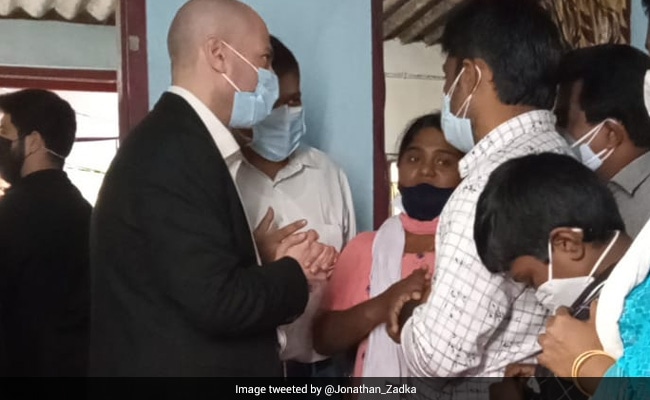 Jonathan Zadka met the family of Soumya Santhosh in Idukki in Kerala.

Jonathan Zadka, consul general of Israel to South India on Sunday extended condolences to the family of Kerala woman Soumya Santhosh, who lost her life during the Hamas strike in Israel.

"CG, @Jonathan_Zadka, paid a visit to the family of Soumya Santhosh who lost her life during #Hamasattack on #Iseael. On behalf of the Israeli people, @israelinbenguluru extends its condolences to the family at loss. We hope peace restores soon," the Consulate General of Israel to Bengaluru said in a tweet.

"Honoured to pay my respects and convey our sympathies to the family and friends of Soumya Santosh as she was laid to rest in her home town Keerithod, Kerala. May she RIP our prayers are with the family that lost an angel in a cowardly hamas terror attack," Zadka tweeted.

The 30-year-old Indian woman, hailing from Idukki in Kerala, was among those killed in a rocket attack by a Palestinian Islamist group on Tuesday.

She was working as a caretaker to an elderly woman at a house in the Ashkelon, which borders the Gaza strip. According to her family, she was living in Israel for the last seven years. Her husband and nine-year-old son stay in Kerala.

The ongoing violence between Israel and Palestine marks a dramatic escalation of tensions linked to the potential eviction of Palestinian families from East Jerusalem by Israeli settlers and access to one of the most sacred sites in the city, which is a key hub for Islam, Judaism and Christianity.