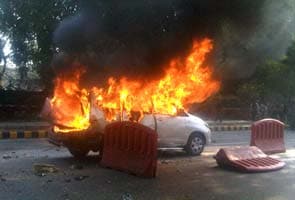 New Delhi: The Interpol has issued Red Corner notices against four Iranians wanted in connection with the bomb attack on an Israeli diplomat here last month.

The Interpol issued the look-out notices against Iranians--Houshang Afshar Irani, Syed Ali Mahdiansadr, Mohammadreza Abolghasemi and Masoud Sedaghatzadeh, who was arrested by the Malaysian  police from Kuala Lumpur airport on the request of the Central Bureau of Investigation (CBI).

On the basis of request made by the Delhi Police, the CBI had requested the Interpol to issue Red Corner notices against them as they were believed to be behind the attack, sources said.

An Interpol Red Corner notice is the closest instrument to an international arrest warrant. It requests provisional arrest of wanted persons with a view to extraditing them.

Delhi Police Commissioner B K Gupta had claimed that the Iranians had allegedly conducted reconnaissance of the Israeli embassy earlier with the help of an Indian journalist Syed Ahemed Kazmi who was arrested on March 6.

The police had claimed that the module, which attacked the Israeli embassy car on February 13 on Aurangazeb road injuring a mission employee and three others, had receded the mission office way back in May last year before returning to check again in January and February.

Investigators have claimed they tracked Kazmi after the arrest of Masoud Sedaghatzadeh, the operational head of the module which carried out the attack in Bangkok in Malaysia.

Promoted
Listen to the latest songs, only on JioSaavn.com
According to police sources, Sedaghatzadeh was allegedly in touch with Irani and technical surveillance of Irani led police to his purported links with Kazmi.

Israeli diplomat Tal Yehoshua and an Indian driver of the embassy vehicle were among four people injured in the February 13 blast after a magnetic bomb stuck to the vehicle went off.