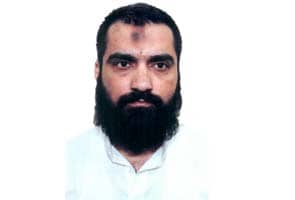 New Delhi: Abu Jundal, the alleged 26/11 handler now being interrogated in Indian custody, is said to be the highest-ranked Indian in the deadly Lashkar-e-Taiba group. More details are now emerging about this man with 10 aliases.

The National Investigation Agency today registered an FIR against Jundal in connection with the 26/11 case.

Sources say Jundal, whose real name is Syed Zabiuddin Ansari, was recruited by a Kashmir-based Lashkar operative in 2005. A young Ansari is said to have been indoctrinated in those post-Gujarat-riot years. According to sources Jundal has said during his interrogation that one of his seniors in college in Beed, Maharashtra, was a man named Fayaz Kagazi, who is now a Lashkar operative. He has reportedly said that Kagazi motivated him and introduced him to Aslam Kashmiri an LeT commander.

In 2005, Jundal was allegedly sent to Kathmandu in Nepal for two months of training in handling arms and explosives. He returned and allegedly got involved in plotting the Ahmedabad blast of February 2006.

The interrogation has reportedly revealed that Jundal also worked closely with Riyaz and Iqbal Bhatkal, the founders of the Indian Mujahideen (IM), to recruit people for the Lashkar and the IM.

Sources say Jundal, as the Indian in the group, was the one who trained the terrorists who attacked Mumbai on what to wear, what to say etc. Jundal, who belongs to Beed in Maharashtra, speaks Marathi, Urdu, Hindi and also a bit of Arabic.

Jundal allegedly got involved in planning for the 26/11 Mumbai terror operation at the beginning of 2008. As Abu Jundal, the handler, he allegedly met the ten men who struck Mumbai on 26/11 2008, twice. Once in the initial days, when he taught them Hindi. Then he met them a few days before the attack, when allegedly he briefed the terrorists Mumbai - the roads, means of transport and the people. Jundal has reportedly said that the 10 terrorists found it difficult to comprehend how a single city could have several railway stations; Jundal helped them understand how to reach some of them.

He has reportedly said that as the attacks on Mumbai began, he was in a control room near the international airport in Karachi.  Supervising the operation there, he has been quoted as saying, were ISI officers and Lashkar commanders including Zaki-ur Rehman Lakhvi. He has reportedly said that he was in the 26/11 control room for just for one day - the first day of the operation - after which he was removed and asked to "take rest" by Lakhvi. Sources say Jundal has also said that after Lakhvi's arrest in December 2008, the ISI destroyed the control room in Karachi

Also, after Ajmal Kasab became the only terrorist to be captured alive during 26/11, Jundal has allegedly said that all handlers including him were asked to leave Pakistan. Jundal allegedly travelled out of Pakistan on a Pakistani passport issued in the name of Risat Ali. He operated in Saudi Arabia for about a month scouting for new recruits for the Lashkar, but US intelligence officials and India were alerted to him after he made a call to Pakistan, that was tracked down by the US.  He was soon arrested and was duly deported from Saudi Arabia to Delhi and is now being interrogated by intelligence officers and the Delhi Police.

"We identified him almost a year ago...it was a well-guarded secret...we tracked him.  I think the world appreciates how India is going about tracking every one of the 26/11 masterminds," Home Minister P Chidambaram said yesterday.

India is firm that Jundal's confessions so far indicate that Pakistani state actors were involved in the 26/11 terror operation. But Pakistan's advisor to the Interior Ministry Rehman Malik rejected Home Minister P Chidambaram's statement yesterday, saying neither his country's Inter-Service Intelligence (ISI) nor any other state agency was involved in terror activities. Mr Malik tweeted today in reference to Abu Jundal,  "Having a forged passport does not entitle someone to be a Pakistani." And then, "Pakistan and India needs to work together to act against these terrorists/extremists."

In discussions with India about its own investigation and trial for those connected to 26/11, Pakistan had told India that Abu Jundal had been arrested.  When asked how Jundal had then managed to leave the country, Mr Mallik said this was not the same man listed in a dossier shared between the two countries.

He said yesterday, "Jundal is Indian. India is failing to control its citizens...I told (Home Minister) Chidambaram that Hindu extremism is growing in India."

Promoted
Listen to the latest songs, only on JioSaavn.com
Mr Chidambaram had said, "He (Jundal) has confirmed that he was in the control room and he has named a few people who were in the control room...that confirms our  suspicion that this was an organized effort which had some  kind of state support.  The argument that it was non-state actors who were behind the massacre is no longer valid."

Mr Malik reacted sharply, stating, "Each time India has accused the ISI of involvement in a terror attack, it has been proved wrong."
Comments
26/11Abu JundalAbu Jundal arrestMumbai attacks

Nobody Trusts Chirag Paswan, NDA Has Nothing To Do With His Party: Anurag Thakur