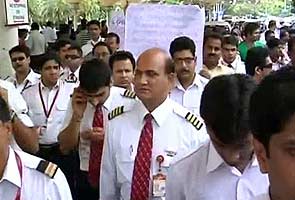 Mumbai: Kingfisher Airlines Ltd  will ground its fleet for another week after failing to resolve an impasse with staff over salaries that have gone unpaid for seven months, deepening the crisis at what was once India's No.2 carrier.

The airline controlled by liquor baron Vijay Mallya has never turned a profit since its launch in 2005 and has been effectively shut since Monday after a weekend protest by members of staff turned violent.

On Friday, about 150 Kingfisher employees, following what police said was the suicide of the wife of a staff member, held a protest march from Mumbai's airport to the airline's office nearby, adding pressure for a resolution to the carrier's long-running financial problems.

"How can the management realistically expect us to work?" said Krishna Kumar, a 35-year-old engineer in Mumbai who joined Kingfisher six years ago.

"We have borne this for seven months," Kumar said, wearing a black armband.

Talks between airline management and Delhi-based pilots and engineers broke down on Thursday. Similar talks in Mumbai on Wednesday ended in what one senior pilot called a stalemate.

The airline was extending what it has described as a partial lock-out to October 12, "or up to such earlier date on which the said illegal strike is called off," spokesman Prakash Mirpuri said in a statement late on Thursday.

The Centre for Asia Pacific Aviation (CAPA), which estimates the airline has total debt of $2.49 billion, proposed in a report on Thursday that it voluntarily shut down in order to restructure.

However, it said there is only an "outside chance" of an "orderly recovery."

"If a decision is taken to revive the airline then the time has come for decisive action to demonstrate that they believe in the business and the required promoter funding should not be delayed any longer," CAPA said.

Kingfisher has failed thus far in efforts to find an overseas airline or other investors to inject fresh equity into the company. Last month, India allowed foreign airlines to own up to 49 percent in domestic carriers, a move that had long been pushed by Kingfisher.

"CAPA does not expect any foreign airline to invest in Kingfisher in its current state with its massive debt burden, crippled fleet and poor employee morale," it said, adding that a fully funded turnaround would require at least $1 billion.

Before this week, Kingfisher was flying only 10 planes out of a fleet that once numbered 64.

Police in Delhi said the wife of a Kingfisher employee had hung herself on Thursday, with stress over her family's precarious financial situation apparently a factor.

"The husband not getting salary for months is definitely a major reason, as per the suicide note," said A.K. Ojha, a commissioner of Delhi's south-west police district.

Rohan Shrivatsava, 28, who has been with the airline for five years and was part of Friday's protest, said he had been looking for another job without success.

"Getting a job after working at Kingfisher is not possible. Do you know how many airline engineers are in the market running for jobs?" he said.

A 31-year-old in cargo operations who declined to be identified said he had earned about 18,000 rupeesa month in salary and had paid 7,000 rupees a month to rent a small room.

"My landlord has been furious about my rent dues. I have not paid rent for last three months. How do I pay my rent, where do I live if I am thrown out tomorrow?"

Some of the employees' ire was directed at Mallya, the self-described "King of Good Times" known for his lavish lifestyle.

One placard read: "Is your party over Mr. Mallya?"

Kingfisher's frustrated lenders, mostly government banks led by State Bank of India, have refused to extend it any further credit in the absence of fresh equity.

"Banks have a very clear perspective, we want our money back. By getting money back we don't mean selling the office, tables, chairs and laptops," S. Vishvanathan, deputy managing director at SBI, said on Friday after a meeting the previous day between lenders and the airline.

"We have constantly been telling them that we want a concrete plan. They're not coming up with it so the engagement is going on. It is up to the banks to decide what they want to do - pull the plug or help improve the company," he said.

"These decisions are being taken by the banks at their individual levels," he told Reuters.

An official with the aviation regulator said on Tuesday that Kingfisher would not get government approval to resume flying unless it pays salaries and submits an acceptable recovery plan.

Kingfisher plans to use 600 million rupees in accounts frozen by authorities to pay staff, the regulator said. Tax officials froze the airline's accounts earlier this year after it failed to deposit taxes deducted from staff.

Promoted
Listen to the latest songs, only on JioSaavn.com
Kingfisher shares fell 4.7 percent on Friday, effectively at their daily limit of 5 percent for the fifth straight session.