Irom Sharmila in Delhi, to appear before court over her fast against Armed Forces Special Powers Act 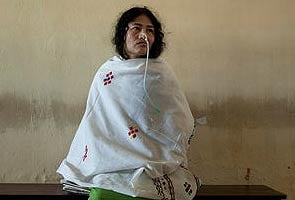 New Delhi: Social activist Irom Sharmila, who has been on fast for about 12 years demanding the repeal of controversial Armed Forces Special Powers Act (AFSPA), landed in Delhi today.

Ms Sharmila is in Delhi to appear before a court in connection with a fast she undertook over the repeal of the controversial act. Sources say she will demand that the case should be transferred to Manipur.

She has to appear before the court under IPC 309 (attempt to commit suicide) for fasting at Jantar Mantar in Delhi.

Promoted
Listen to the latest songs, only on JioSaavn.com
Ms Sharmila launched her fast unto death in 2000 after 10 civilians were killed by Assam Rifles personnel at Malom area near Imphal airport.

She is now in jail and is being fed through her nose at JNIMS Hospital in Imphal.