Special judge NK Malhotra sent the chartered accountant to Tihar Jail after he was produced from the custody of the Enforcement Directorate, whose special public prosecutor Nitesh Rana had sought three more days of custodial interrogation. 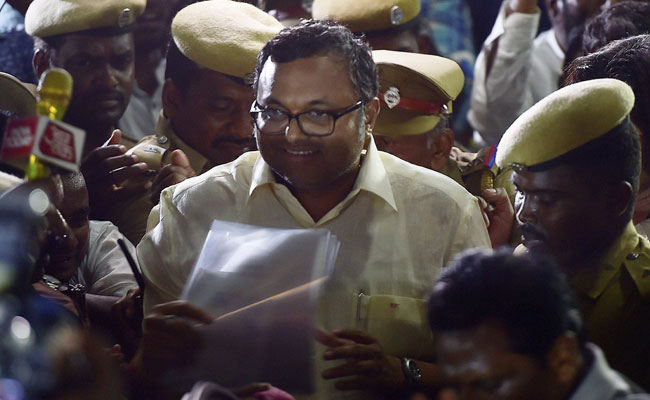 Special judge NK Malhotra sent the chartered accountant (CA) to Tihar Jail after he was produced from the custody of the Enforcement Directorate (ED), whose special public prosecutor Nitesh Rana had sought three more days of custodial interrogation.

Mr Bhaskararaman was arrested from a five-star hotel in the heart of the national capital on February 16.

Mr Karti's name had cropped up in the case which relates to Foreign Investment Promotion Board (FIPB) approval granted in 2007 for receipt of funds by INX Media when his father and senior Congress leader P Chidambaram was the Union finance minister during the previous UPA regime.

The ED had earlier claimed that during the course of investigation, it was revealed that Mr Bhaskararaman, a qualified CA, had been assisting Mr Karti to manage his "ill-gotten wealth" in India and abroad.

The agency had said the investigation required the presence of Mr Bhaskararaman for collecting vital evidence and other information which was within his special knowledge and exclusive domain.

It had alleged that INX Media had deliberately and in violation of the conditions of the approval made a downstream investment of 26 per cent in the capital of INX News Pvt Ltd without specific approval of FIPB, which included indirect foreign investment by some foreign investors, and generated Rs 305 crore foreign direct investment in INX Media Pvt Ltd against the approved foreign inflow of Rs 4.62 crore.

Promoted
Listen to the latest songs, only on JioSaavn.com
To wriggle out of the situation without any punitive action, INX Media entered into a criminal conspiracy with Mr Karti, the ED has alleged.

The FIPB unit of the finance ministry had not only granted illegal approval but also misinformed the investigation wing of Income Tax Department, it had alleged.

Will Elections Be Delayed For Punjab? A Decision Is Likely Today