For the first time since it was instituted on June 21, 2015, coinciding with the Summer Solstice each year, Yoga Day has gone digital this year. 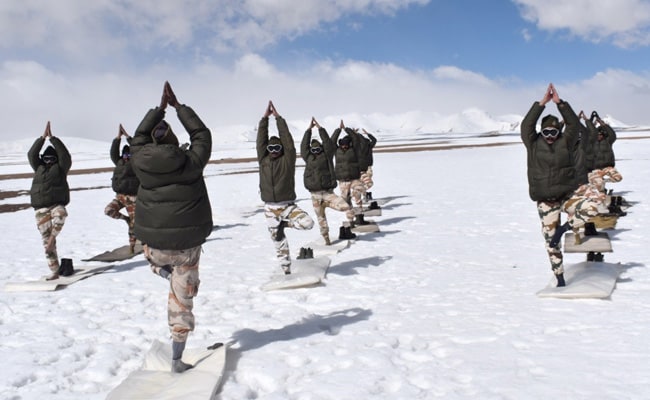 ITBP personnel were seen performing yoga asanas in rhythm and with great discipline.

Amid snow-white mountain peaks and sub-zero temperatures of Ladakh, the soldiers of the Indo-Tibetan Border Police (ITBP) performed yoga asanas at an altitude of 18,000 feet to  mark the International Yoga Day.

ITBP shared pictures and video of its personnel performing suryanamaskaar, pranayama and meditation in rhythm and with great discipline, in some of the most difficult terrains in the country.

Prime Minister Narendra Modi this morning addressed the nation to mark the International Yoga Day amid a spike in coronavirus cases across the country.

"Covid-19 attacks our respiratory system. What makes our respiratory system stronger is "Pranayama", which is a breathing exercise. Usually, anulom, vilom are popular "Pranayama" techniques. We should make these a part of our daily routine. There are many yoga exercises that boost our immunity and strengthen the metabolism," PM Modi said, urging people to make Yoga a part of everyone's daily life.

"A lot of coronavirus patients across the world are benefiting due to yoga. It gives us the confidence to struggle during the difficult times and emerge victorious. Yoga gives us physical strength and peace of mind," he added.

India crossed the 4 lakh-mark last night after a record jump in the number of coronavirus infections over the last three days. Over 12,000 patients have died in the country so far. Across the world, more than 86 lakh have been affected by the pandemic.

For the first time since it was instituted on June 21, 2015, coinciding with the Summer Solstice each year, Yoga Day has gone digital this year.

This year's theme is "Yoga at Home and Yoga with Family". "This year, we are celebrating Yoga day at our homes. Today is also a day when we will strengthen the bond with our family," PM Modi said today.