Over 400 Stranded Due To Snowfall In Uttarakhand Rescued By ITBP

More than 100 vehicles were stranded due to heavy snowfall in the region. 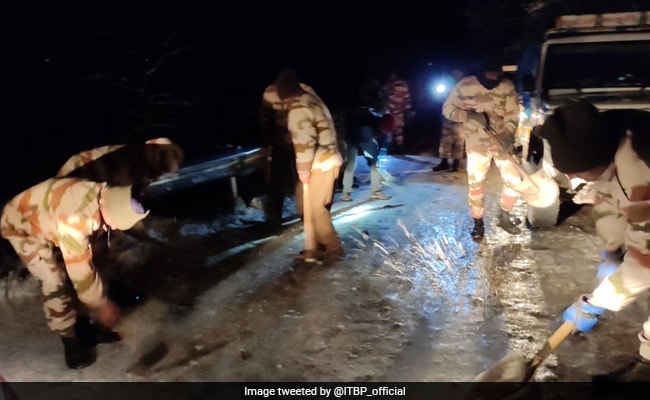 Over 400 people, stranded on the Suakholi-Mussoorie road, have been rescued by the Indo-Tibetan Border Police (ITBP) personnel since Saturday night.

More than 100 vehicles were stranded due to heavy snowfall in the region.

Personnel of ITBP Academy, Mussoorie, are clearing the road and facilitating the safe movement of vehicles on high slope roads.

Visual:
More than 100 vehicles and 400 passengers stranded since late last night rescued by ITBP personnel of Academy, Mussoorie on Suakholi- Mussoorie main road. Thick cover of hard snow and ice on the road was dangerous for crossing vehicles; slipping while crossing. #Himveerspic.twitter.com/uV585M4QsT

The road clearance and rescue operations are underway.

According to the India Meteorological Department (IMD), Mussoorie is likely to witness rain or snow with cloudy sky next week.