On Sunday, Kalvari, the first of the submarines built in India as part of a 3 billion dollar deal, sailed out of Mazgaon docks in Mumbai. (Photo Courtesy: Indian Navy)

New Delhi: The Indian Navy's new Made-In-India submarine, which went to sea trials on Sunday, is effectively a gun without bullets.

That's because the primary weapon of the Scorpene class submarine, the Black Shark torpedo, is designed and manufactured by a subsidiary of Finmeccanica, the Italian defence manufacturer that has been blacklisted after it paid bribes to sell a dozen helicopters to India.

On Sunday, Kalvari, the first of six diesel-electric submarines built at Mumbai in a 3 billion dollar deal with a French firm, sailed out of the Mazgaon docks to have systems tested ahead of being commissioned in a few months into the Navy.

Without her torpedoes, the Kalvari will have no weapons to target enemy submarines. The only other weapons onboard are French-designed Exocet missiles which are designed to strike enemy ships, not submarines. 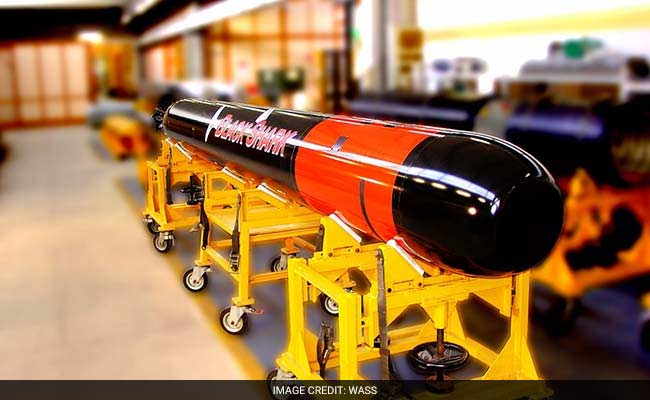 All six Scorpene class submarines are meant to be delivered to the Navy by 2020, which is in desperate need of modernization especially given China's aggressively upgraded navy. India currently has only 15 elderly Russian and German designed submarines.

The deal for 100 Black Shark Torpedos, worth 1,500 crores, was on the verge of being signed in 2013 with Finmecannica's subsidiary  but  was suspended just months before the government cancelled the helicopter deal with AgustaWestland, also owned by the Italian giant. The Finmecannica corporate family was then banned from any business with the Indian government.

In August 2014, the Defence Ministry said in a detailed note that if Finmceccania is the lowest bidder for a defence deal, "all such procurement/acquisition cases shall be put on hold, until further orders". The problem is that no new decision has been taken, and senior navy sources tell NDTV that identifying, shortlisting and testing new torpedoes as part of a new tender is likely to take at least another five years.

The Black Shark torpedo was selected from among different contenders based on its performance in technical trials, its competitive price and the opinion of officers who said it was best suited for the submarines that were to be built in Mumbai.