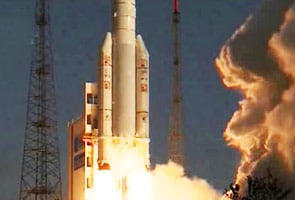 Bangalore: India's first 'military' satellite was put into the geosynchronous orbit five days after it was launched on August 30 onboard a European rocket from Kourou in French Guiana off the Pacific coast.

"The advanced multi-band communication satellite GSAT-7 has been placed in the geosynchronous orbit at an altitude of about 36,000km above earth's surface after three orbit-raising manoeuvres from our master control facility at Hassan in Karnataka," the state-run Indian Space Research Organisation (ISRO) said in a statement.

Hassan is about 180 km from Bangalore.

The 2.5-tonne spacecraft's antennae, including the ultra-high frequency Helix antenna were deployed before it was stabilised on its three-axis in the orbit.

"The satellite will reach its assigned orbital slot of 74 degree east longitude in the geostationary orbit within the next 10 days and its transponders in UHF, S, C and Ku bands will be switched September 14," the statement said.

The four transponders, which receive and transmit signals at high frequency, will improve the maritime communications among the Indian Navy's warships.

A 108 ampere-hour Lithium-ion battery enables the Rs.185-crore satellite to function even during the eclipse period.

According to defence experts, the satellite will enable the navy to acquire blue water capabilities and need not depend on foreign satellites like Inmarsat, which provide communication services to its ships.

Promoted
Listen to the latest songs, only on JioSaavn.com
The cost of the launch onboard the Ariane-5 heavy rocket of the European Space Agency (ESA) Arianespace was Rs.440 crore.