Last week, the British High Commission in India took part in the Remembrance Day ceremonies across the country. 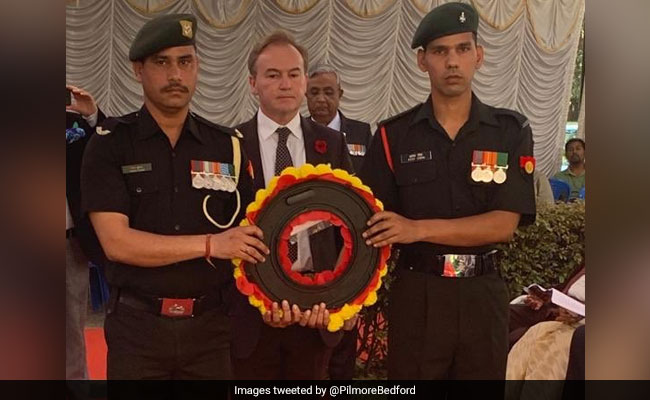 British deputy high commissioner Jeremy Pilmore-Bedford today said in Bengaluru at the Remembrance Day service that India's role in both the World Wars was significant.

The event was held at St Mark's Cathedral in Bengaluru. The deputy high commissioner was invited to read a portion of the order of service to the congregation.

"India's role in both the World Wars was significant. Over 1.3 million Indian service personnel fought in theaters across Europe, the Middle East and East Africa in the First World War. Further 2.3 million Indian servicemen fought in North Africa, Italy, Middle East, Burma and the Far East in World War II, making the Indian contribution one of the largest in the Commonwealth and the most widespread in both wars," said Mr Pilmore-Bedford.

"Last year marked 100 years since Armistice Day and we held a series of events to commemorate the contribution of the Indian Armed Forces in World War I. Remembrance is our opportunity as a society to recognize the sacrifice made by all service personnel, on all our behalves, irrespective of their backgrounds. It is about honoring the self-sacrifice of those who paid the ultimate price," he added.

Last week, the British High Commission in India took part in the Remembrance Day ceremonies across the country. On November 13 in New Delhi, The Prince of Wales attended a Service of Remembrance commemorating the sacrifices of soldiers from India, the UK and across the Commonwealth in World War I and World War II.

Marking the 75th anniversary year of the Battle of Kohima, he recited the Kohima Epitaph and laid a wreath of Khadi poppies, made by members of the Royal British Legion in the UK. He visited a number of graves of those who lost their lives in service.