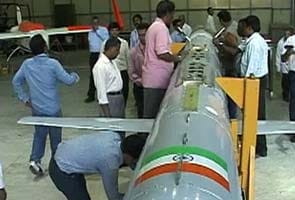 New Delhi: India's trial of its first indigenous cruise missile Nirbhay had to be terminated halfway today, when the missile deviated from its course about 20 minutes after launch. (Read: 10 must-know facts about Nirbhay)

As the missile went off its flight trajectory, its engine was cut off to bring it down to ensure coastal safety. It fell near the coast; the Defence Research and Development Organisation or DRDO said no one was injured.

The test failed, but the DRDO, which has developed the missile, said the mission was successful. "The long range cruise missile Nirbhay was successfully launched today at 1150 hours from launch complex, Chandipur, Odisha,  meeting the basic mission objectives successfully. After travelling approximately mid-way, deviations were observed from its intended course. Further, flight was terminated to ensure coastal safety," it said in a statement. (Missile launch in pics)

Experts say maiden missile tests failing has been a common occurrence in many countries. India's Agni missile had failed in its first test, but the DRDO soon saw success with it. The organisation is still examining today's flight details.

The Nirbhay (which means fearless) is India's answer to America's Tomahawk and Pakistan's Babur.

It is very manoeuvrable, can fly at tree-top level making it difficult to detect on radar, and strikes targets more than 700 km away carrying nuclear warheads, giving India the capability to strike deep into enemy territory.

Unlike other ballistic missiles like the Agni, Nirbhay has a wing and pronounced tail fins. It launches like a missile and in early flight the small wings get deployed. It then flies like an aeroplane and can even hover near the target, striking at will from any direction.

This last part did not happen today as the flight was aborted. The DRDO said that at the point that it was brought down today, the missile was like a small 5 metre-long aircraft.

The Nirbhay is a sub-sonic cruise missile and gives India the capacity to launch different kinds of payloads at different ranges from various platforms at a very low cost. It can be launched from a mobile launcher. The missile has a fire-and-forget system that cannot be jammed.

Promoted
Listen to the latest songs, only on JioSaavn.com
India has had the capability to make ballistic missiles for some time now and has made tactical missiles of different capacity. But it had not developed a cruise missile yet and DRDO scientists worked very hard on the Nirbhay.

The US had deployed cruise missiles very effectively during the Gulf War.