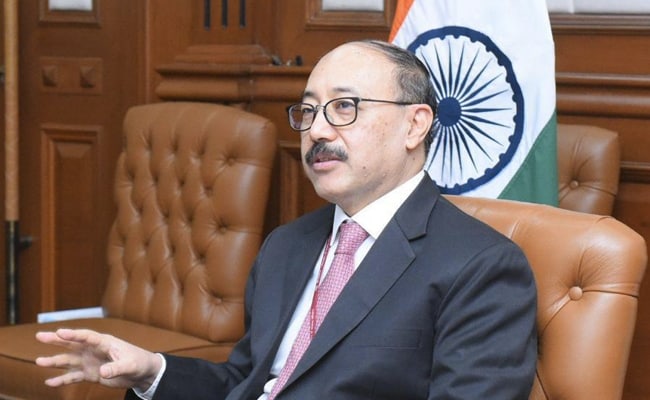 Both sides are interested in expanding cooperation in the Space sector: Harsh Vardhan Shringla (File)

Foreign Secretary Harsh Vardhan Shringla said on Saturday that New Delhi would be involved in the development of the transmission lines for the Rooppur Nuclear Power Plant in Bangladesh as part of its credit line for the neighbouring country.

"A significant part of our third line of credit will go to civil nuclear cooperation. Transmission lines of Rooppur Nuclear Power Plant will be developed by Indian companies under the line of credit. Value of these transmission lines will be worth over USD 1 billion," Mr Shringla said at a briefing following talks between Prime Minister Narendra Modi and his Bangladeshi counterpart, Sheikh Hasina.

He added, "Both sides (India and Bangladesh) are interested in expanding cooperation in the Space sector."

"This included some discussion on how we can preserve the legacy of 1971," he said.

He further pointed out that there are very active collaboration and cooperation among India, Bangladesh, Nepal and Bhutan under the BBIM group. "We spoke about Motor Vehicle Agreement that is in a fairly advanced stage. We want to take it further. We're facilitating Bangladesi exports to both these countries via India," he said.

Touching upon the Teesta issue, Mr Shringla said the topic was discussed and PM Modi reiterated India's sincere and continued efforts to conclude the agreement in consultation with relevant stakeholders. Along with that, the Indian side also requested for early finalization of a draft for sharing of water of Feni River.

Summing up the whole visit, he said, "This evening we have held restricted format discussions and delegation-level talks, this allowed the two PMs to take stock of progress in various areas. This included some discussion on how we can preserve the legacy of 1971 and Commerce and connectivity, cooperation and water resources, security, defense, power and energy, new areas like Artificial Intelligence, environment, societal application of nuclear energy."

On the issue of whether PM Modi and PM Hasina discussed the Rohingya issue, the foreign secretary said that this issue does come up and should come up. "There was an understanding between both sides that Bangladesh has done a lot to provide refuge to over a million displaced persons from Myanmar's Rakhine state," he said.

He added: "Among the 109 ambulances that we just gifted, few of them are for the camps where these displaced persons (Rohingya refugees) are housed."

Mr Shringla stated that PM Modi thanked PM Sheikh Hasina for erecting a war memorial in Bangladesh "in recognition of the contribution of Indian soldiers who were martyred during the liberation war of Bangladesh. Both PMs laid the foundation stone for the memorial."