What It Looks Like When India's 1.3 Billion People Stay Home

Like everywhere else under lockdown, the social and economic impacts have stunned the country. The difference in India is the scale - the sheer number of people who, as they go about their daily lives, create the world's worst traffic and dirtiest air. 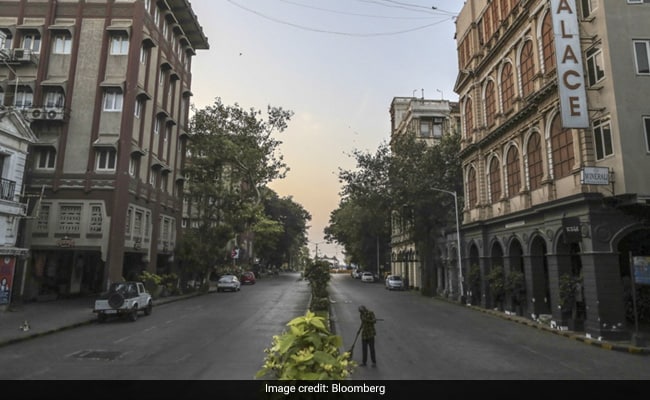 A man cleans up a street in the Colaba area in Mumbai during the nationwide lockdown, April 5.

On March 24, Prime Minister Narendra Modi ordered the world's largest lockdown, effectively commanding one out of every six people on earth to stay home in an effort to stem the coronavirus outbreak in the country. The humongous state-run railways recorded the first suspension of services in its 167-year history, and millions of migrant day laborers walked hundreds of miles back to their villages along deserted highways.

With 5,351 infected and 160 deaths, the official toll of India's caseload is dubiously small-the country had conducted only 128,000 tests as of Wednesday. Lockdown notwithstanding, the country could see as many as 300 million infections with 10 million of them severe, the risks compounded by population density, poor sanitary conditions and a largely decrepit health care system, according to Ramanan Laxminarayan, director of the Center for Disease Dynamics, Economics and Policy in Washington D.C.

Like everywhere else under lockdown, the social and economic impacts have stunned the country. The difference in India is the scale - the sheer number of people who, as they go about their daily lives, create the world's worst traffic and dirtiest air. And when those people stay home, the reversal is similarly massive. Five technology companies, from an Indian grocery startup to a global online learning giant, provided Bloomberg with data that helps illustrate what happens when 1.3 billion people stay home.

Until last month, it was faster to walk than to drive across India's most clogged roadways, including the Silk Board in Bangalore, the Ambiance Mall area in New Delhi or the Teen Haath Naka junction in Mumbai, where traffic flows 48 different ways. The now-empty streets are "the most visible macro perspective on the country's lockdown," says Rohan Verma, the chief executive officer of MapmyIndia.

Absent the throngs of buses, two-wheelers, rickshaws and hand-drawn carts, birdsong and cleaner air has returned. India was home to 14 of the 20 most polluted cities in the world in 2019, according to IQAir. Only one-Mumbai-was in the top 20 on April 9, 2020. Photos of blue skies and transparent river water circulated on social media, captivating an audience stuck indoors.  The shutdown has brought air quality to acceptable levels even in Delhi, which last year was blanketed by such heavy haze that schools were closed and flights couldn't land, and for the first time in recent history, residents of Jalandhar in the Punjab could see snow-capped Himalayas, some 200 kilometers from the city.

Online grocery shopping is still fledgling in India, though this lockdown is encouraging more people to buy more from sites like New Delhi-based Grofers. The site typically caters to working class clients, and they're buying the usual pandemic staples -  hand sanitizer sales are up nearly sevenfold. But they're also indulging in pricey natural foods, which cofounder and Chief Executive Officer Albinder Dhindsa said took him aback. "The middle class doesn't have spare cash to hoard supplies," said Dhindsa. "So it was surprising to see packets of dry fruits, bottles of honey, and immunity-boosting herbal chawanprash fly out of our warehouses."

Global shutdowns have put new focus on online learning, and India has 250 million students now home from school. The country is the second-biggest market for pioneer Khan Academy, which offers classes in Hindi, English and the blended Hinglish, as well as Kannada and Gujarati. The site has seen unprecedented growth during the pandemic, and lockdown brought another deluge: registrations by parents are up 1,000%, teacher sign-ups jumped 700%, student accounts by 450%.

In second week of the lockdown, over 627 million people watched an average of 4 hours 48 minutes every day, for a total of 2.4 million years worth of viewing time, according to Nielsen and Broadcast Audience Research Council of India (BARC). At prime time on Sunday, March 29, 51 million tuned into the national Doordarshan channel for television's "biggest day ever," according to BARC Chief Executive Officer Sunil Lulla. What was on? A rebroadcast of the 1987 hit serial Ramayan, an adaptation of the ancient Hindu epic Ramayana.