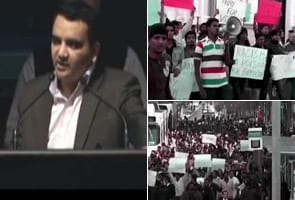 Melbourne: Gautam Gupta, who is a student leader in Melbourne and a household name among the Indian community in Australia, is getting into the big league. He is all set to fight the Australian elections that are less than a month away.

Gautam, who is the founder of Federation of Indian Students of Australia (FISA), became the voice against attacks on Indian students after taking up the fight for Shravan Kumar who was in coma for months after an alleged racial attack.

Since then he has organised many protests and rallies against racist attacks. Now, Guatam says he has the money power too for the rough and tumble of elections.

"I think any financial backing is very strong because that really shows that people are objectively backing and supporting a particular candidate. That it is much beyond words.. I think that is required. Our community is half-a-million strong in Australia. Absolutely, the case is there, the chance is there, the opportunity is there," he said.

A group of Indian businessmen and professionals have come together to raise half a million dollars to back Guatam as a candidate.

"At this stage community is well settled and we have half-a-million people in Australia. And raising these half a million is not a problem we have already discussed it. And this half-a-million is just a start, maybe it might be more than that," said Hari Yellina, Property investor and businessman.

Gaurav Kaushik, Vice President of prominent IT firm in Melbourne, added, "I am not sure if the political parties will come and support us because had they been doing their job properly. These crimes and these incidents wouldn't have happened. So, I am not sure how seriously are they considering us or Gautam for that fact."

"I think if Gautam is to run for this election, I assume that racism will be a topic that he will be questioning and fighting against...we are all for that kind of thing.. I am all for that type of strategy too," said Vann Rudd, Candidate, Revolutionary Socialist Party, Australia.

Sudha Saini, a working professional and socialite there said that Indians are not well represented down under.

Whatever the outcome of Gautam Gupta's bid in this election, for Australia's large Indian community, it's a step in the right direction, uniting and finding their own political space, in a country they call home.