Indian shot in Kenya mall for failing to answer query on Islam: report 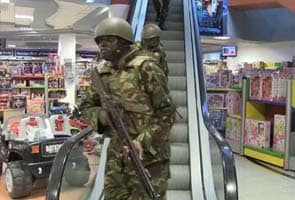 Kenyan forces inside the Nairobi mall

Abuja: An Indian man was shot when he failed to answer a question on Islam asked by Somali militants who were holding hostages after killing 68 people at an upmarket mall in the Kenyan capital of Nairobi.

The heavily armed gunmen belonging to Al Qaeda-linked Somali militant group Al Shabaab were reportedly trying to weed out non-Muslims for execution by interrogating people on their faith or asking them to recite the 'Shahada'.

On the second floor of Westgate, Nairobi's swankiest shopping mall, Joshua Hakim saw gunmen, some of whom appeared to be teenagers, strapped with ammunition belts and carrying AK-47 assault rifles. "They were firing indiscriminately, they shot a lot of people," he said.

During a lull in the firing, the attackers called out for Muslims to identify themselves and leave, British newspaper The Guardian quoted Hakim as saying.

Covering the Christian name on his ID with his thumb, Mr Hakim approached one of the attackers and showed them the plastic card.

"They told me to go. Then an Indian man came forward and they said, 'What is the name of Muhammad's mother?' When he couldn't answer they just shot him," he said.

Promoted
Listen to the latest songs, only on JioSaavn.com
It was not clear from the report whether the Indian was injured or fatally shot.

Two Indians were among 68 people killed by the Islamist militants in the packed mall on Saturday. Four Indians, including two women and a girl, were among nearly 200 people injured in the brazen attack on the part Israeli-owned mall.