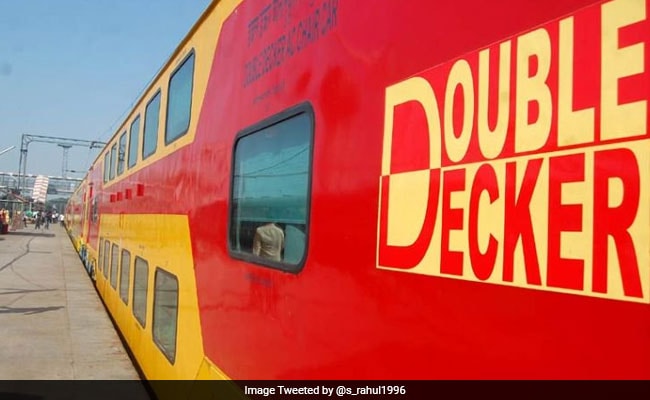 Fare of Uday express will be lower than that of 3-tier AC in regular express trains. (Representational)

Uday Express is equipped with comfortable reclining chairs. Its 120-seater AC coach will have large automatic food and beverage vending machines for passengers.

The high demand routes on which train's services will become operational include Delhi to Lucknow, Chennai to Thiruvananthapuram et cetera. The fare of the train will be lower than that of 3-tier AC class (3AC) in regular express trains.

The 11-coach train will have facilities like large LCD screens in every coach along with Wi-Fi speaker system.

According to a senior railway ministry official, the unique selling proportion (USP) of the double decker express is its better passenger amenities.

The train having 40 per cent more carrying capacity than other trains aims to enhance public transporter capability clearing the rush in high-demand routes.

Though it will not have sleeper berths despite being an overnight service, measures have been taken to make the journey comfortable with many added facilities, the official added.

There will be comfortable seats with adequate leg space to relax at night. The interior of coaches will be aesthetically designed to give a modern look besides being equipped with bio-toilets.

Promoted
Listen to the latest songs, only on JioSaavn.com
In the rail budget 2016-17, Minister for Railways Suresh Prabhu has introduced four new train projects. Uday is one of the ambitious projects out of four. The train is slated to run at a speed of 110 kilometres per hour on high density routes.