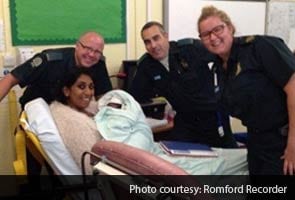 London: An Indian-origin teacher in the UK has dramatically given birth to a baby boy in a classroom after she went into labour while in school.

30-year-old Diane Krish-Veeramany went into labour, a week before her due date, and three of her colleagues at Manford Primary School helped deliver the baby, called Jonah.

Krish-Veeramany, who delivered the baby last Thursday said, "Everyone was so supportive and just acted on instinct."

"Luckily, my husband got to the school before I gave birth," she said.

"We now joke that he was late for his first day at school as he was born after the bell," the primary school teacher was quoted as saying by BBC.

Krish-Veeramany had gone to a morning meeting, but shortly afterwards she asked to go home after feeling ill.

"I texted my husband to come and get me... but my colleagues asked if I wanted an ambulance. I said 'I'll just go home' - I just didn't think it would be a contraction as it didn't feel like one," she said.

Her husband Vijaye Veeramany was on his way to pick up his wife when he got a call telling him she was in labour.

Teaching assistants Dita Gojnovci, Chris Sword and Sam Mustafa helped her give birth in a classroom.

"It all just happened really quickly, within 20 minutes of these phone calls I'd had Jonah," she added.

Jonah is her second child, but this birth was very different from her previous delivery which was in a hospital.

After giving birth Krish-Veeramany was taken by paramedics to Queen's Hospital, in Romford, where mother and baby were later allowed to go home.

Promoted
Listen to the latest songs, only on JioSaavn.com
"The school have named the room he was born in after him - it's now called Jonah's Room," she said.

"Everyone has seen this sort of thing on the television before but you never dream it will happen in real life," she added.