The crew hoisted the tricolour as they raced towards Port Stanley in the Falkland Islands.

Defence Minister Nirmala Sitharaman had flagged off the 56-foot vessel from Goa on September 10.

New Delhi: It was termed as "historic" when an all-woman Indian Navy team set sail for one of the toughest feats --  a global circumnavigation trip - in September last year. And now the six-member crew of the tiny sailboat Indian Naval Sailing Vessel (INSV) Tarini has successfully crossed the notoriously rough Drake Passage, as they rounded Cape Horn off the Southern tip of South America, sometimes called the Mount Everest of sailing. They hoisted the tricolour as they raced towards Port Stanley in the Falkland Islands.

Promoted
Listen to the latest songs, only on JioSaavn.com
Prime Minister Narendra Modi congratulated the crew and said he was "proud of their accomplishments".

Wonderful news! Delighted that INSV Tarini has rounded Cape Horn in the last few hours. We are extremely proud of their accomplishments. pic.twitter.com/edmCvfecDN 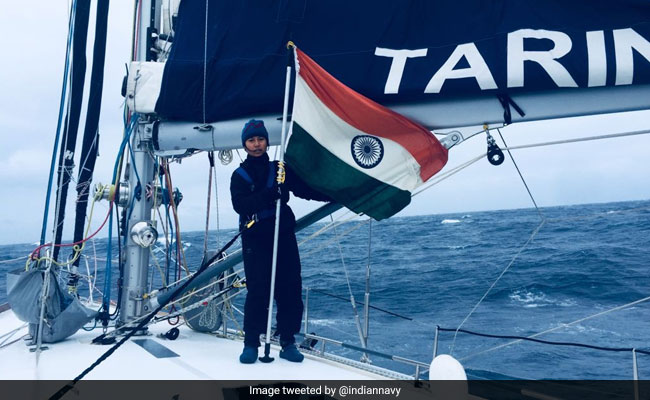 Led by Lieutenant Commander Vartika Joshi, the five-leg expedition is titled 'Navika Sagar Parikrama'. The leg between Lyttleton and Port Stanley in the Falkland Islands off Argentina in the Atlantic Ocean may well be their toughest. They are slated to return to Goa in April.

The expedition aims to showcase 'nari shakti' on the world platform and increase their participation in the challenging environment. During their journey, the officers are also collating meteorological, ocean and wave data and monitored marine pollution besides putting together piping hot vadas.

Good weather with Sea not so bad, #INSVTarini crew made the best of the opportunity.... Culinary skills at their best.....Deep fried Vadas pic.twitter.com/APu5xzjqHj

The first Indian solo circumnavigation was undertaken by Commander Dilip Donde, SC (Retd) from August 19, 2009 to May 19, 2010 on board another India-built vessel INSV Mhadei. It was later used by Lt Commander Abhilash Tomy for his own single-handed, unassisted, non-stop circumnavigation from November 1, 2012 to March 31, 2013.
Comments
INSV TariniDrake passagePM Modi

"Not In Favour Of Having Cells In Party On Caste Basis": Nitin Gadkari