The team, dispatched on Sunday evening, will report to district authorities at Rajkot and join rescue efforts as required. Six more teams are ready for the rescue operations, informed the navy. 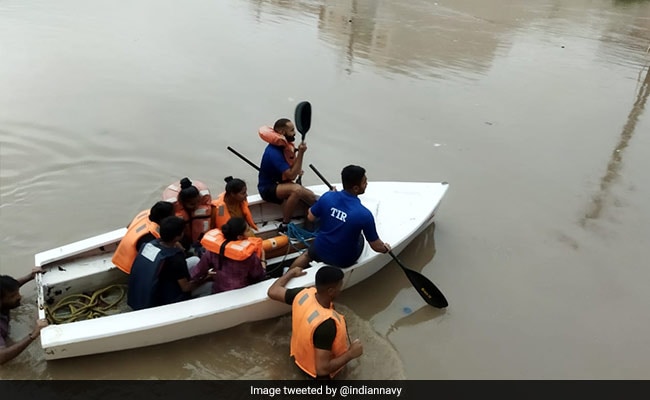 A naval humanitarian assistance and disaster relief (HADR) team on Monday was dispatched for Rajkot as a part of the ongoing civil rescue efforts in flood-affected areas.

As per a statement released by the Indian Navy, a naval HADR team, consisting of naval divers with support gears, was dispatched from INS Sardar to Rajkot on civil administration's request for assistance.

The team, dispatched on Sunday evening, will report to district authorities at Rajkot and join rescue efforts as required. Six more teams are ready for the rescue operations, informed the navy.

The navy further said that several rescue teams have also been deployed from INS Valsura in Jamnagar to assist stranded people from various parts of rain-affected and inundated areas of the city.

"Equipped with Gemini boats, life vests, first aid kits and other requisite gears, the teams rescued a large number of people including the elderly and women and shifted them to safety. Naval teams also provided food packets to stranded citizens," it added.

Senior naval authorities are in constant liaison with civil administration to offer any help needed in flood relief activities and more rescue teams have been kept on standby to be dispatched at short notice, said the navy.

Meanwhile, normal life was disrupted and about 1,400 people had to be shifted to shelters away from low lying areas in Rajkot following heavy rainfall.

"In last 24 hours, the city received 13 inches of rainfall and there is high rainfall warning for tomorrow also. Around 1,400 people shifted to shelters and over 300 people were rescued as many areas got waterlogging. No casualties reported so far," said Amit Arora, Commissioner of Rajkot Municipal Corporation.

Earlier today, Chief Minister Bhupendra Patel also held a high-level meeting to review the floodlike situation created due to heavy rains in Saurashtra and especially in parts of the Jamnagar and Rajkot districts.