French fisheries vessel Osiris, which rescued Commander Tomy, reached off Amsterdam isle by 9:30 am and he was transferred to the hospital there for further medical evaluation and treatment, a defence spokesperson said. 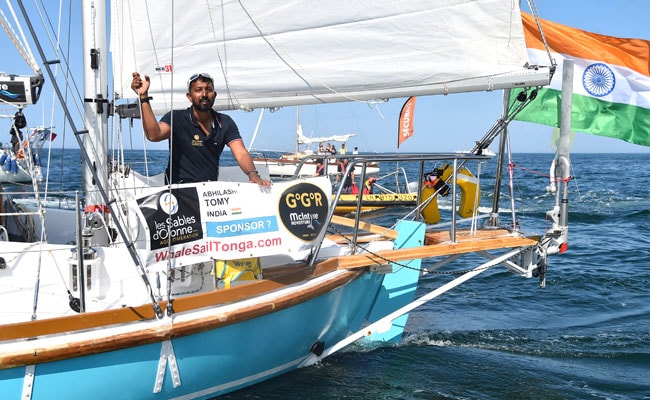 Indian sailor Abhilash Tomy, who was rescued from the Indian Ocean off Australia, has been admitted to a hospital in a remote island. Navy officer Tomy was safely rescued from his stricken yacht with a serious back injury on Monday after a carefully-coordinated international effort.

French fisheries vessel Osiris, which rescued Commander Tomy, reached off Amsterdam isle by 9:30 am and he was transferred to the hospital there for further medical evaluation and treatment, a defence spokesperson said.

Race organisers said another competitor, 32-year-old Irish skipper Gregor McGuckin, had chartered a course for Commander Tomy even though his own vessel had been dismasted in the same storm.

He was not in distress but had radioed for a controlled evacuation and was in touch with reconnaissance aircraft.

"Tomy and Gregor have been transferred ashore at "Amsterdam isle" by a medical team and have been taken to hospital for X-Ray and medical checkup," the spokesman said.

He said the fishing vessel Osiris will remain in the area till HMAS Ballarat (Australian warship) and INS Satpura reach the island.

According to reports, the island only has a small hospital with limited facilities.

Adrift some 3,500 kilometres from western Australia, the 39-year-old navy commander was confined to his bunk and unable to move.

But Indian and Australian officials said a French fisheries patrol vessel involved in the international rescue mission had found the sailor "in a stable condition".