The High Commission on Wednesday tweeted an image of embassy building lit-up in Tricolour ahead of the Independence Day. 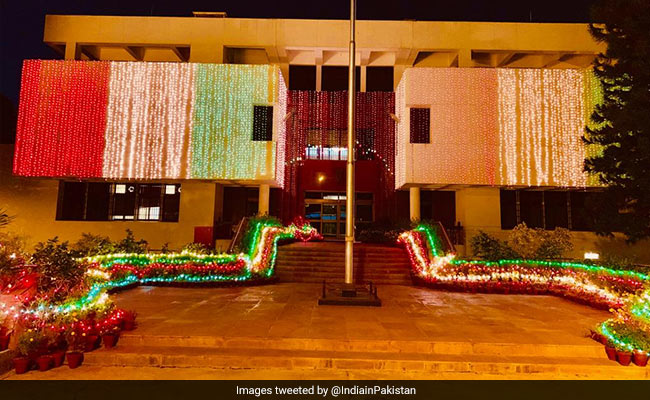 The embassy building lit-up in tricolour ahead of Independence Day

The Indian High Commission in Islamabad is all set to celebrate the 73rd Independence Day of the country with much fervour, even as Islamabad continues its bitter rhetorics following revocation of Article 370.

The High Commission on Wednesday tweeted an image of embassy building lit-up in tricolour ahead of Independence Day.

"Resplendent in the colours of the Tiranga, the High Commission of India in Pakistan quietly awaits the dawn of 15 August 2019 when it will burst into celebration of the 73rd #IndependenceDay. Jai Hind!" a tweet by India in Pakistan read.

The tweet tagged Indian envoy to Pakistan Ajay Bisaria, who recently returned to New Delhi following Islamabad's decision to downgrade diplomatic ties with India. The country has also informed India that it would not be sending its High Commissioner-designate to India Moin-ul-Haq, who was expected to officially take charge on August 16.