The remarks of Anil Ghanwat, a member of the Supreme Court-appointed committee on farm laws, came amid demands by protesting farmers for legislation on MSP even as they have hailed the decision for withdrawal of three farm laws. 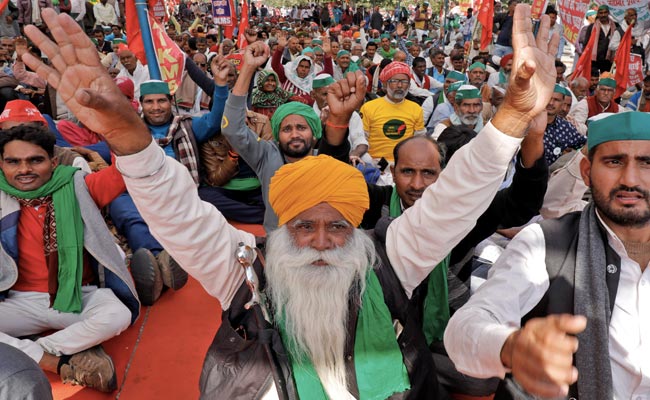 The panel member also termed the move to repeal the three farm laws as "unfortunate".

Indian economy will face a crisis if a law is made for guaranteeing minimum support price (MSP) for crops, Anil Ghanwat, a member of the Supreme Court-appointed committee on farm laws, said on Monday.

His remarks came amid demands by protesting farmers for legislation on MSP even as they have hailed the decision for withdrawal of three farm laws.

"If there is going to be a law (on MSP), we (India) will face a crisis. With the law, if the (procurement) process goes down someday, no one will be able to buy the produce as procuring it at a price lower than the MSP will be illegal and they (traders) will be put in jails for it," Mr Ghanwat told ANI.

Mr Ghanwat, who is president of Shetkari Sangathan, said both the central government and the farmer leaders should think of some other way to boost farm incomes and that a law on MSP is not a solution.

"It's going to be a crisis because not only the traders will be harmed but also the stockists and everybody else related to it. Even the commodity market will be disturbed. It will be distorted," he said.

"We are not against MSP, but open-ended procurement is a problem. We require 41 lakh tonnes of grains for buffer stock but procured 110 lakh tonnes. If MSP law is made, all farmers will demand MSP for their crops and no one will be in a position to earn anything out of that," he added.

"Farmers were demanding reforms for the last 40 years. This is not a good step. The existing system of agriculture is not enough," he said.

"Even if the new laws which were introduced were not very perfect, there were some flaws which needed to be corrected. I think this government had the will to reform agriculture as the earlier governments didn't have the political will. I hope another committee will be formed comprising of opposition leaders and farm leaders from all states and then new farm laws are discussed in the parliament and should be introduced," he added.

Mr Ghanwat said that the government has to run the country and do politics as well and noted that the agitation against three farm laws was "also creating a law and order situation".

"So maybe they must have thought that if the situation will remain like this, then the upcoming Uttar Pradesh election will not be easy for them and they can face losses. So to avert the damage they must have taken this step," he said.

Mr Ghanwat also suggested that the farmers should diversify their produce and should go for high-value crops which will give them more returns.

"We have to scrap the Essential Commodity Act because it is used as a weapon against farmers. Whenever the prices rise, farmers get some profits, the government intervenes and puts in stock limits. It puts an even higher interest on transportation limits. It imposes export bans. These are the weapons used to reduce the farm produce prices which is hurting the farmers," he said.

"This (three farm laws) was an effort by this government to give some freedom to agriculture, but unfortunately, we have lost it now," he added.

The protesting farmers, while welcoming repeal of three farm laws, are seeking remunerative MSP and procurement (at C2 50 per cent level) as a legal entitlement "for all farmers, for all agricultural produce".