The Indian Coast Guard (ICG) received a distress alert on Wednesday from a tugboat named Ganga-I that was approximately 30 nautical miles southeast of Port Blair in the Andman and Nicobar Islands, the statement said. 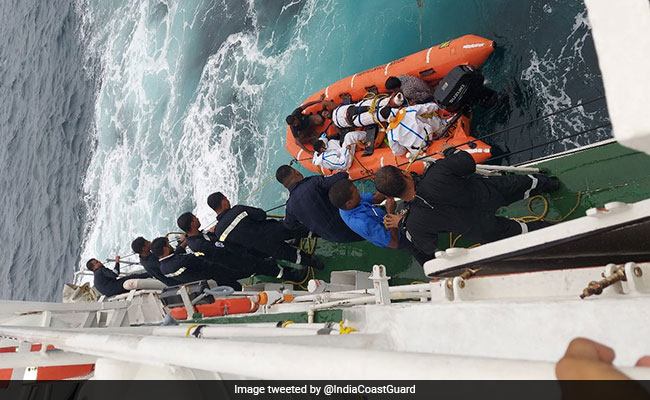 The Indian Coast Guard (ICG) has rescued nine crew members from a sinking vessel off the Port Blair coast, according to an official statement issued on Thursday.

The ICG received a distress alert on Wednesday from a tugboat named Ganga-I that was approximately 30 nautical miles southeast of Port Blair in the Andman and Nicobar Islands, the statement said.

The tugboat had left Port Blair at 1.40 pm on Tuesday with a barge loaded with construction material, it added.

"The vessel was scheduled to arrive at Hutbay at 6 am on Wednesday. However, the vessel crew observed heavy flooding in the engine room en-route Hutbay and activated distress in the morning on Wednesday to alert the authorities," the statement said.

Due to uncontrolled flooding, the crew had abandoned the tugboat and took shelter on the barge for safety, it mentioned.

After receiving the distress signal, the ICG launched a rescue mission.

"The crew of the distress vessel are reported to be safe. However, one crew has sustained a leg injury and was successfully evacuated by Coast Guard Ship C-146," the statement said.

The crew members of the tugboat were brought to Port Blair and subsequently shifted to the GB Pant hospital for further medical management, it added.

Chhattisgarh Government To Provide Rs 6,000 Per Year To Landless Families