The AN-32 transporter aircraft had crashed on June 3 and the IAF was able to trace the wreckage in Arunachal Pradesh on June 11. 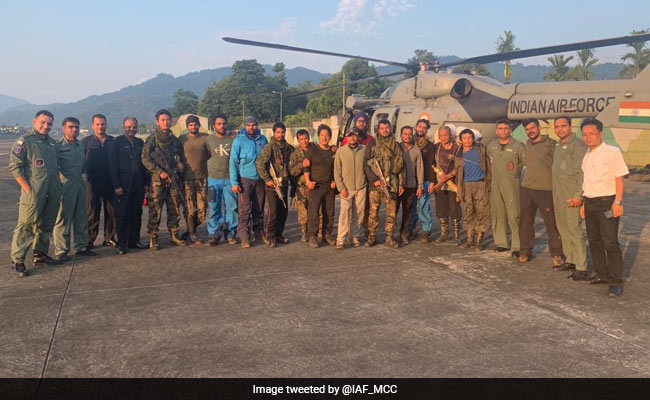 All the members of the rescue team were in good health, the Indian Air Force said.

The Indian Air Force (IAF) on Saturday evening retrieved all the members of a rescue team from the site where one of its AN 32 aircraft had crashed in Arunachal Pradesh earlier this month.

The AN-32 transporter aircraft had crashed on June 3 and the IAF was able to trace the wreckage in Arunachal Pradesh on June 11. A day later, the rescue team had reached the site to retrieve the bodies of 13 IAF personnel who were on board the aircraft.

The task of retrieving the bodies and remains of the 13 air force personnel as well as the black box of the aircraft was completed on June 20.

The effort to retrieve the rescue team members was delayed due to inclement weather and rain. The weather improved slightly in the evening, allowing the "risky" helicopter operations to be undertaken, the IAF said.

All the 15 members of the rescue team -- eight IAF personnel, four from the Army and three civilians -- were retrieved with the help of Advanced Light Helicopters and Mi-17V5 helicopters.

All the members of the rescue team were in good health, the IAF said.

"All the members, who were taken to Aalo in West Siang district, are fit and in good health," Shillong-based IAF spokesman Wing Commander Ratnakar Singh said.

The members of the rescue team were stranded in the border area of Siang and Shi-Yomi districts for 17 days at a height of 12,000 feet, where they were airdropped.

The Russian AN-32 aircraft went missing 33 minutes after taking off from Assam''s Jorhat on June 3. It was headed to Mechuka in Shi-Yomi district of Arunachal Pradesh.