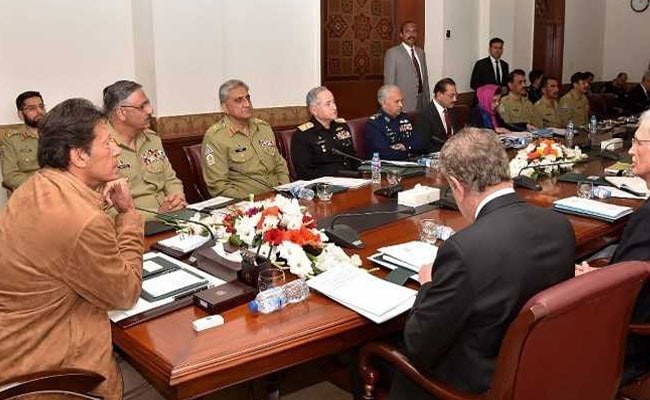 Pakistan Prime Minister Imran Khan has called a meeting of the National Command Authority, which controls the country's nuclear arsenal, on Wednesday, hours after India launched an air strike on a terrorist camp in Balakot in response to the attack in Pulwama two weeks ago.

Even though it denied that the Indian Air Force had struck a terrorist camp and caused heavy casualties, Pakistan vowed to respond "at the time and place of its choosing" and raise the issue at the United Nations and other international forums. "We will surprise you," a spokesperson for the country's army said, adding the response would include all domains including "diplomatic, political and military."

The air strikes came 12 days after the same group carried out a suicide attack in Jammu and Kashmir's Pulwama that killed 40 Central Reserve Police Force or CRPF troopers.

At a hasty special meeting of the National Security Committee, Mr Khan asked the armed forces and the people of his country to remain prepared for "all eventualities."

Besides a special meeting of the National Command Authority or NCA, the government has also called a joint session of the parliament on Wednesday.

Indian experts, however, dismissed the nuclear authority's meeting as merely symbolic. "I think Pakistan is trying their last gambit which is why today the National Command Authority, that is in charge of nuclear weapons, is meeting tomorrow. That is the kind of threat they (Pakistan) are portraying," Former Diplomat KC Singh told NDTV.

Just days ago former Pakistan president Pervez Musharraf, under whom the NCA was set up, had said India could "finish us by attacking with 20 (nuclear) bombs" if Pakistan launched even a single nuclear attack on the neighbouring country, according to report in the Dawn newspaper.

But on Tuesday, Pakistani Foreign Minister Shah Mahmood Qureshi said, "Do not underestimate us. We have our own sense of timing and we will act and react. Pakistan will do what Pakistan should do... we will not disappoint the people of Pakistan."

However, facing tough questions from journalists, Mr Qureshi was forced to end his news conference abruptly.