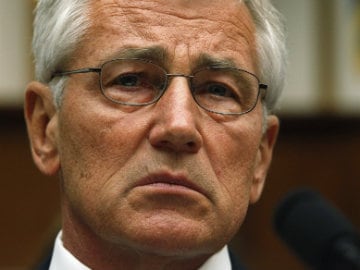 Washington: Describing India as one of the most significant countries in the world, United States Defense Secretary Chuck Hagel has said the world's largest democracy will help shape a "new world order" that is emerging in this century. (Defence Secretary Chuck Hagel's Visit to Boost India-US Strategic Ties)

Mr Hagel, who landed in India on his maiden trip yesterday as Defense Secretary, met External Affairs Minister Sushma Swaraj this morning. He is also expected to meet his Indian counterpart Arun Jaitley and other leaders of the new government.

"When you look at the world today, and you're all quite familiar with this, that India not only represents one of the most significant countries by any measurement in the world today, but will help shape a new world order that is emerging in this young century," Mr Hagel told reporters travelling with him to India.

His visit comes in less than a week after Secretary of State John Kerry and Commerce Secretary Penny Pritzeker visited New Delhi for India-US Strategic Dialogue.

"The relationship between the United States and India certainly for our interests, for US interests, and I think for India's interests, as well as the Asia Pacific, but also global interests, is important," he said. (Chuck Hagel's India Visit Aimed at Nurturing Defence Ties: Pentagon)

"Where we can find common interests, where we can share areas that help promote our own countries', our own economies' stability, security, peace, trade, technology," he said, adding that the point of his trip here is to take advantage of the opportunity to meet with a new Indian government.

Recalling his last trip to India in 2008 as an American Senator, Mr Hagel said, "In those meetings in 2008, it was pretty clear then that the potential for India and what they were evolving toward was going to be very important for our future".

"The sooner we can find ways, the United States and India, to participate in these areas of mutual benefit and also concern, I think the better as we see this world that is uncertain and complicated and dangerous and unpredictable continue to evolve," he said.

He said big power stability and big power security have always been important in the world and their importance is not going to be diminished over the next few years.

Mr Hagel said his current India trip is to acquaint himself with the ground realities and that he would be more in listening mode.

"This is an opportune time to spend a couple of days here listening, learning, and getting acquainted," Mr Hagel said.

"Are there interests in other areas? We are doing more than we've ever done military-to-military with India with joint exercises. We want to continue to build on those exercises. We'll talk about where we can expand the potential for joint exercises," he said.

A supporter of India US civilian nuclear deal, Mr Hagel said power and energy are going to be a specifically important driving force for oil-developing economies, emerging economies and growing economies.

Promoted
Listen to the latest songs, only on JioSaavn.com
"That opportunity that I thought that was important for many reasons that the Bush administration opened up was about one example of where I think different kinds of initiatives can be explored with these two large democracies, one being the largest democracy in the world and the other being the oldest democracy in the world," he said.

"So India and the United States begin with a pretty solid framework of general understanding, especially of democratic values and principles, and that's not an insignificant starting point in foreign policy or foreign relations," he said.