A pact on cooperation in the field of atomic energy was also signed. Tran thanked India for extending support in building a research reactor for the purpose of peaceful use of nuclear energy. 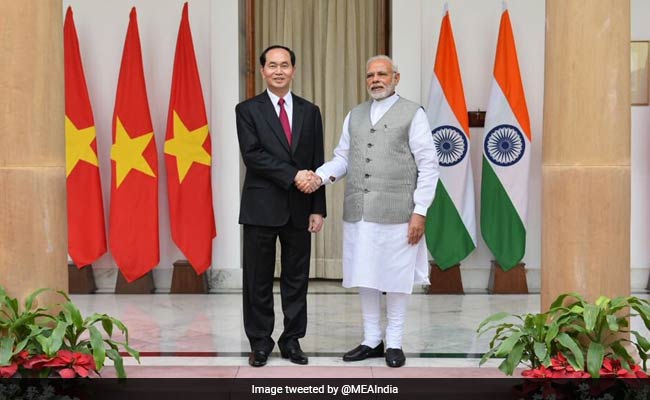 The two countries called for a comprehensive approach to deal with terrorism.

New Delhi: India and Vietnam have agreed to intensify ties in defence and security, underlining that cooperation in the two key areas was an "important and effective pillar" of their strategic partnership.

The two sides also condemned terrorism in all its forms and manifestations, including cross-border terrorism, an India-Vietnam joint statement said.

The document was released by the Ministry of External Affairs after the delegation-level talks yesterday between Prime Minister Narendra Modi and Vietnamese President Tran Dai Quang, which covered an entire gamut of issues.

A pact on cooperation in the field of atomic energy was also signed. Tran thanked India for extending support in building a research reactor for the purpose of peaceful use of nuclear energy.

During the joint press statement yesterday, PM Modi had said that the two countries decided to cooperate in defence production and explore opportunities in transfer of technology.

Both sides agreed to expedite the implementation of the USD 100 million Line of Credit for building of high-speed patrol boats for the Vietnam Border Guards.

They also agreed that defence and security cooperation is an "important and effective pillar of the Comprehensive Strategic Partnership, and expressed satisfaction at the progress being made in this domain", the statement said.

The two sides also decided to strengthen cooperation in the maritime domain, including anti-piracy, security of sea lanes and exchange of white shipping information, the statement said.

PM Modi and Mr Quang and also discussed stepping up cooperation in the non-traditional security sector and cyberspace.

The two sides agreed to operationalise the MoU signed between the National Security Council Secretariat of India and the Ministry of Public Security of Vietnam and initiate the Deputy Ministerial-level dialogue to enhance cooperation in traditional and non-traditional security matters and undertake training and capacity building programmes.

On terrorism, the two countries called for a comprehensive approach to deal with the menace, which should include countering radicalisation, recruitment, training and movement of terrorists including Foreign Terrorist Fighters, the statement said.

The approach should also look into blocking sources of financing terrorism including through organised crimes, money-laundering, smuggling of weapons of mass destruction, drug trafficking and other criminal activities.

Promoted
Listen to the latest songs, only on JioSaavn.com
It said that the approach should also be aimed at dismantling terrorist bases, safe havens and countering misuse of the internet, cyberspace, including social media and other communication techniques by terrorist entities groups and their affiliates.

The two sides further agreed that they would cooperate in building a strong consensus for early adoption of the Comprehensive Convention on International Terrorism (CCIT), which was first proposed by India in 1996, , the document said.