As India, US Prepare For High-Level 2+2 Dialogue, Here's The Full Agenda 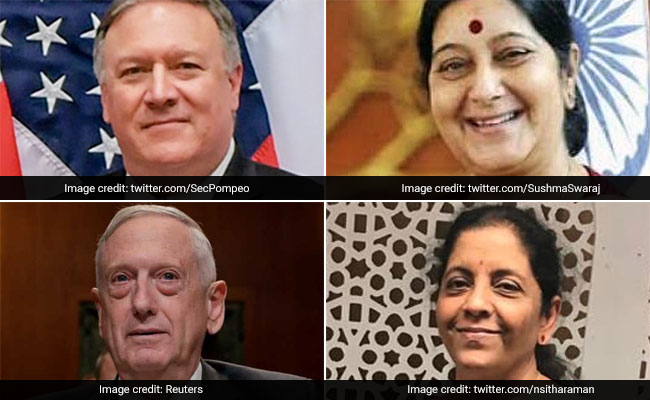 A number of key issues such as the US' sanctions on import of Iranian crude oil, boosting cooperation in the Indo-Pacific region and finalising a pact on encrypted defence technologies will be the focus of the inaugural high-level two-plus-two talks between India and the US in Delhi on Thursday, official sources said.

India's plan to ink a Rs 40,000 crore deal with Russia to procure a batch of S-400 Triumf air defence missile systems may also figure in the talks, sources indicated today, according to news agency PTI.

Issues like enhancing trade, effectively dealing with terrorism and India's concerns over the Trump administration's decision to make changes in the H-1B visa programme are also expected to figure prominently during the high-level discussion, they said.

Under the new framework finalised last year, External Affairs Minister Sushma Swaraj and Defence Minister Nirmala Sitharaman will hold talks with their counterparts - the US Secretary of State Mike Pompeo and Secretary of Defense James Mattis.

As Secretary Pompeo arrives in Delhi tomorrow from Islamabad, India will also try to get his view about the new government in Pakistan headed by newly appointed prime minister Imran Khan, sources told news agency PTI.

Chairman of the US Joint Chiefs of Staff General Joseph Dunford will also be part of the US delegation.

Twelve officials from each side are expected to attend the talks which will be followed by a luncheon meeting.

Sources said the focus of the talks will be to lift the strategic engagement between the two countries to a "whole of government approach" covering a wide range of areas for cooperation.

Significantly boosting defence and security cooperation, including in areas of co-development of military platforms, will be a priority, they said.

Referring to India's yet-to-be-inked S-400 missile deal with Russia, the sources said it was for the US to decide on what steps it may take.

India's position on the issue has been that it will go ahead with the deal notwithstanding American sanctions on military transactions with Moscow.

On US sanctions on import of Iranian oil, the sources said India will also explain to the US delegation its position on the issue, including how the import has been crucial for India's energy security.

In May, the US withdrew from the landmark Iran nuclear deal and re-imposed the sanctions that had been suspended in return for curbs on Tehran's nuclear programme.

Iran is India's third largest oil supplier after Iraq and Saudi Arabia. The US' sanctions on import of Iranian petroleum products will be effective from November 4.

India and the US will also attempt to firm up a long-negotiated agreement which will provide for obtaining critical and encrypted defence technologies by the Indian military from the US, official sources said.

The COMCASA will help India obtain critical and encrypted defence technologies for Indian defence platforms from the US.

The sources said ways to bolster cooperation in the Indo-Pacific region and ways to deal with challenge of terrorism will figure prominently in the talks.

The US delegation will arrive in Delhi tomorrow. While Secretary Pompeo will leave from India on Thursday evening, Secretary Mattis will depart on Friday.

Defence Minister Sitharaman will host a dinner for him on Thursday evening.