The exercise will bring together the navies of India, Japan, Australia and the U.S. in the Bay of Bengal at the end of the year, according to senior Indian officials who asked not to be identified, citing rules. 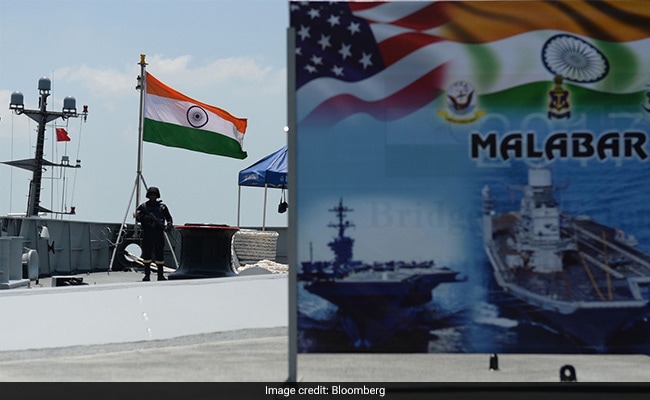 The Malabar exercises between the Indian and the US navies were instituted in 1992.

India plans to invite Australia to join the annual Malabar naval exercise that has so far included just Japan and the U.S., in a move that could risk China's ire.

The decision to include Australia in the drills -- the first time all members of the regional grouping known as the Quad will be engaged at a military level -- comes as Beijing and New Delhi are caught up in their worst border tensions in four decades. The exercise will bring together the navies of India, Japan, Australia and the U.S. in the Bay of Bengal at the end of the year, according to senior Indian officials who asked not to be identified, citing rules.

New Delhi is expected to clear the way next week for a formal invitation to Australia following final government clearance and consultations with the U.S. and Japan, the officials said.

"The timing of India potentially letting Australia into Malabar would be especially significant at this juncture," said Derek Grossman, researcher at the Washington-based RAND Corporation who worked in the U.S. intelligence community for more than a decade. "It would send a significant message to China that the Quad -- U.S., Australia, Japan, and India -- are de facto conducting joint naval exercises, even if not technically conducted under the auspices of a Quad event."

China has been uncomfortable with the informal coalition of four democracies, which was first formed in 2004 to help nations in the Indo-Pacific after the tsunami and revived in 2017. Post the coronavirus pandemic, the grouping has been coordinating efforts every month with Vietnam, South Korea and New Zealand.

A spokesperson for Australia's defense department said in an emailed statement on Friday that while the nation was yet to receive an invitation to Exercise Malabar, "Australia sees value in participating in quadrilateral defense activities in order to increase interoperability and advance our collective interests in a free, open and prosperous Indo-Pacific region."

While the Malabar exercises between U.S. and Indian navies were instituted in 1992, they have been more regular since 2004 with other Asian nations joining in the annual event. China had objected to the only other time Australia participated in the drills along with India, Japan, U.S. and Singapore in 2007.

India's inclusion of Australia this year follows a defense agreement and upgrading ties to a Comprehensive Strategic Partnership. The Mutual Logistics support agreement announced in May by Prime Ministers Narendra Modi and Scott Morrison allows access to each other's bases and ports. India has a similar agreement with the U.S.

Canberra's inclusion in the games was "only a matter of time" given improving defense and economic ties, according to Biren Nanda, former Indian High Commissioner to Australia and senior fellow at Delhi Policy Group. Australia's merchandise trade with India for the year ended June 2019 was A$21.1 billion ($14.5 billion), according to Australia's Department of Foreign Affairs and Trade.

"There's no direct relation between inviting Australia and what's happening at the Sino-Indian border," said Nanda in a phone interview. "This was a natural progression. Yet the question will be raised: how would the Chinese regard this? And they will react negatively. Just like they had done earlier."

China objected to Japan's inclusion in the U.S-India annual Malabar event in 2015 with the then foreign ministry spokesperson Hong Lei warning "relevant countries" to not "provoke confrontation and create tension" in the region. Five years later, with an assertive China pushing neighbors across the Asian seas, Nanda expects a similar response.

Yet, there may be more acceptance to the idea of "like-minded democracies that seek to keep the Indo-Pacific free and open" amid India's rapidly souring on China ties, purely out of frustration, said Rajeswari Pillai Rajagoplan, distinguished fellow at New Delhi-based Observer Research Foundation and author of 'Clashing Titans: Military Strategy and Insecurity Among Asian Great Powers.'

Although India and China are now in the process of disengaging along their 3,488 kilometer (2,167 mile) unmarked boundary in the Himalayas after high-level military and diplomatic talks, the deadly clashes that followed the months-long standoff in the Galwan valley was a blow to relations between the nuclear-armed neighbors.

"Especially after Galwan, there's a growing realization in New Delhi's elite circles that its increasingly difficult to trust China. They have broken more than four decades of agreements. Good trade ties are no guarantee of peace," said Rajagoplan. "They have time and again tried to interfere in other nations' foreign policy. But there's an agreement in India that China should not have a say in who our friends are."

With Washington indicating its willingness to back the region through an increased force deployment in Asia, the Malabar exercises may take on more importance.

"The Quad has always been a security platform but didn't have a military context to it," said Rajagopalan. "The Malabar exercises may give it just that thanks to China upping its ante and threatening the region's security."

--With assistance from Jason Scott.