India Signs Two Agreements To Step Up Cooperation With Cambodia 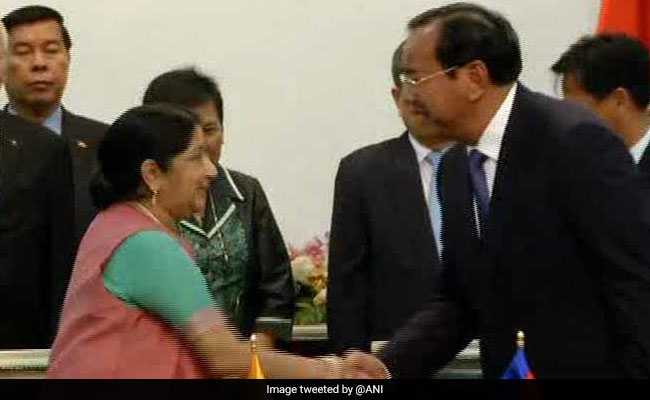 Sushma Swaraj is on a 4-day visit to Vietnam and Cambodia.

Ms Swaraj, who is in Cambodia on the concluding leg of her four-day two-nation tour, discussed with Sokhonn bilateral, multilateral and important international issues at delegation- level talks at the Ministry of Foreign Affairs in Phnom Penh.

"The two ministers discussed bilateral, multilateral and important International issues today at delegation level talks," the Embassy of India in Phnom Penh said in a tweet.

She will also call on Prime Minister Hun Sen and President of the Senate Say Chhum.

The first Memorandum of Understanding (MoU) is on the restoration and preservation of the world heritage site of a temple of Lord Shiva in Cambodia's Preah Vihear.

The 'Temple of Preah Vihear' dates back to the first half of the 11th century AD.

Situated on the edge of a plateau that dominates the plain of Cambodia, it is dedicated to Lord Shiva.

The second MoU is on cooperation between India's Foreign Service Institute (FSI) and Cambodia's National Institute of Diplomacy and International Relations (NIDIR).

The FSI was established in 1986 primarily to cater to the professional training needs of the Indian Foreign Service and the Ministry of External Affairs.

The NIDIR was set up by the Cambodian government with aim to build more qualified human resources in the field of diplomacy.

India's ties are on an upswing with Vietnam and Cambodia -the two major countries in the powerful Association of Southeast Asian Nations (ASEAN) grouping.

India and Cambodia have enjoyed friendly relations for a long time. Both the countries formally established diplomatic relations in 1952. In 2000, Cambodia vowed its full support for India to become a permanent member of the United Nations Security Council.