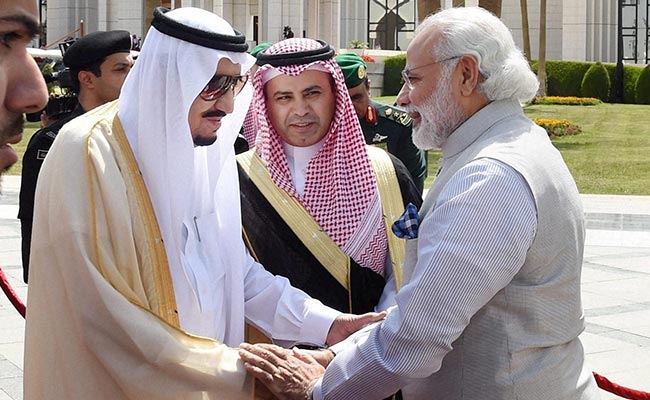 A joint statement issued after the talks between PM Narendra Modi and Saudi King Salman bin Abdulaziz said that both countries agreed to forge a deeper partnership in energy sector. (PTI photo)

A joint statement issued after the talks between PM Modi and Saudi King Salman bin Abdulaziz said that both countries agreed to forge a deeper partnership in energy sector focusing on investment and joint venture in petrochemical complex.

"The two leaders emphasised the importance of expanding trade and investment ties to drive the strategic engagement forward. They directed their Finance and Trade Ministers to work together to find ways and means to substantially increase the flow of bilateral investments and growth of trade ties," the statement said.

There has been a steady increase in bilateral trade, which stood at $39 billion in 2014-15.

"The two leaders agreed upon the need to further strengthen these ties, particularly through diversifying non-oil trade," it added.

During the Prime Minister's two-day visit India showcased its initiatives at improving the ease of doing business and efforts to simplify and rationalise existing rules and relax the foreign direct investment norms in key areas, including railways, defence and insurance.

The two countries also expressed satisfaction at the growing bilateral trade in the energy sector.

"The two leaders agreed to transform the buyer-seller relationship in the energy-sector to one of deeper partnership focusing on investment and joint ventures in petrochemical complexes, and cooperation in joint exploration in India, Saudi Arabia and in third countries," the statement said.

PM Modi invited Saudi firms such as Aramco and SABIC to invest in the India's infrastructure sector.

"Inviting Saudi Arabia to be a partner in India's growth story, Modi encouraged Saudi Aramco, SABIC and other Saudi companies to invest in the infrastructure sector in India and to participate in projects creating mega industrial manufacturing corridors, smart cities as well as the Digital India and Start up India programmes," the statement said.

The Saudi side expressed its interest in investing in infrastructure development in India, especially in priority areas such as railways, roads, ports, and shipping.

The Saudi side also welcomed interest of India in investing in the Kingdom, especially taking advantage of the competitive investment opportunities offered by the Saudi economic and industrial cities.

India is 79 per cent dependent on imports to meet its oil needs and Saudi Arabia is its largest supplier.

The two sides also agreed to focus on areas of training and human resources development and cooperation in research and development in the energy sector.

"In this regard, the two leaders expressed the need for regular meetings under the umbrella of India-Saudi Arabia Ministerial Energy Dialogue," it added.

Both leaders appreciated the well-functioning bilateral institutional mechanisms in the field of trade & investment, energy, defence and manpower.

"They noted that new and potential areas of cooperation identified during the meetings held under these mechanisms had a constructive effect on the expanding bilateral ties and further called for effective implementation of the decisions made under the framework of these mechanisms," it said.

Both leaders also welcomed the signing of the framework agreement between the General Investment Authority in Saudi Arabia and Invest India aimed at facilitating investments by the private sectors in the two countries.