PM Modi, who is on a two-day visit to the Gulf Kingdom to attend the Future Investment Initiative, held talks with Saudi King Salman bin Abdulaziz and powerful Crown Prince Mohammed bin Salman. 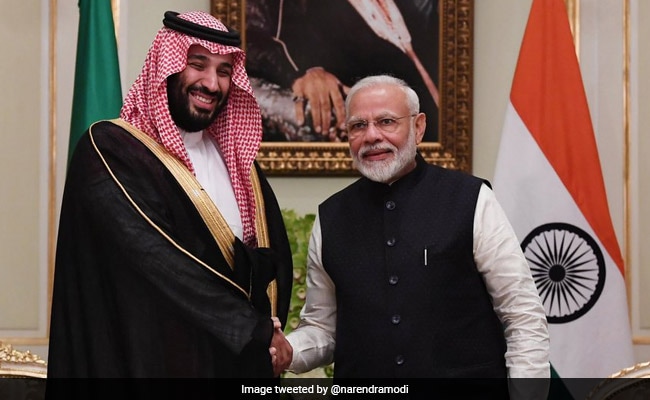 The India-Saudi Arabia Strategic Partnership Council will be headed by PM Modi and Crown Prince Mohammed.

India and Saudi Arabia on Tuesday inked over a dozen agreements in several key sectors including oil and gas, defence and civil aviation to bolster their ties as Prime Minister Narendra Modi held extensive talks with the Kingdom's top leadership during which a Strategic Partnership Council was established to coordinate on important issues.

PM Modi, who is on a two-day visit to the Gulf Kingdom to attend the Future Investment Initiative, held talks with Saudi King Salman bin Abdulaziz and powerful Crown Prince Mohammed bin Salman.

After the delegation-level talks, the two sides signed an agreement to establish the India-Saudi Arabia Strategic Partnership Council to coordinate decisions regarding strategically important issues.

The council will be headed by Prime Minister Modi and Crown Prince Mohammed and meet every two years.

The two sides condemned terrorism in all its forms and manifestations, and agreed to step up bilateral security cooperation.

It is always a delight to meet His Royal Highness Prince Mohammed bin Salman bin Abdulaziz. His vision for Saudi Arabia is remarkable. We had an extensive meeting during which we discussed numerous issues. Stronger friendship between our nations augurs well for our people. pic.twitter.com/33qiXnV7H7

Saudi Arabia, known to be a key ally of Pakistan, has been siding with India in its campaign to rid the region of terrorism and pledged to extend all cooperation to effectively deal with the challenge.

"The two sides stressed that the extremism and terrorism threaten all nations and societies. They rejected any attempt to link this universal phenomenon to any particular race, religion or culture," said a joint statement issued at the end of PM Modi's visit.

It said that both sides expressed their rejection of all terrorist acts and stressed the need to prevent access to weapons including missiles and drones to commit terrorist acts against other countries.

The two sides re affirmed their deep commitment to strengthen the strategic partnership envisaged in the 'Riyadh Declaration' of March 2010, it said.

They agreed on the importance of bilateral engagement to promote ways to ensure the security and safety of waterways in the Indian Ocean region and the Gulf region from the threat and dangers that may affect the interests of the two countries including their national security, the statement said.

An agreement was signed on bringing coordination between e-migration systems of the two countries. An MoU was also signed to roll out RuPay card in the Kingdom - making Saudi Arabia the third country in the Persian Gulf after the UAE and Bahrain to introduce India's digital payment system.

The two sides also vowed to further enhance defence industries collaboration and security cooperation. The first naval exercise between the two nations will take place by end of this year or early next year.

An MoU for a joint venture between Indian Oil Middle East and Saudi company Al Jeri for downstream cooperation and setting up of fuel retail business in the Gulf country was also signed.

India, the world's third-largest oil consumer, imports 83 per cent of its oil needs. Saudi Arabia is its second-biggest supplier after Iraq. It sold 40.33 million tonnes of crude oil to India in 2018-19 fiscal, when the country had imported 207.3 million tonnes of oil.

India buys some 200,000 tonnes of LPG every month from Saudi Arabia.

A series of drone and missile attacks on oil facilities of Saudi Aramco in Abqaiq and Khurais on September 14, jacking up oil prices.

Notwithstanding the attacks, Saudi Arabia assured India that it was committed to meet the country's energy security needs.

PM Modi thanked King Salman for the continued supply of the petroleum products to India despite the attack, Tirumurti said.

The two sides inked an MoU for cooperation in the area of renewable energy. They also signed agreements to increase the number of flights between the two countries to facilitate people-to-people contacts, medicine products regulation and prevention of trafficking of narcotics among others.

"The two sides noted the continued positive economic transformation in both countries and stressed the importance of expanding the trade and investment ties in order to advance the strategic cooperation," the joint statement said.

This is Prime Minister Modi's second visit to the country.

Saudi Arabia last month said that it was looking at investing $100 billion in India in areas like energy, refining, petrochemicals and infrastructure.

They discussed regional and global issues of mutual interest, and reiterated their categorical rejection of all forms of interference in the internal affairs of countries, and the need for the international community to fulfil its responsibilities towards preventing any attacks on the sovereignty of states, the joint statement said.