Addressing a press conference with US Secretary of State Anthony Blinken, Mr Jaishankar said India has a tradition of multi-sourcing defence equipment. 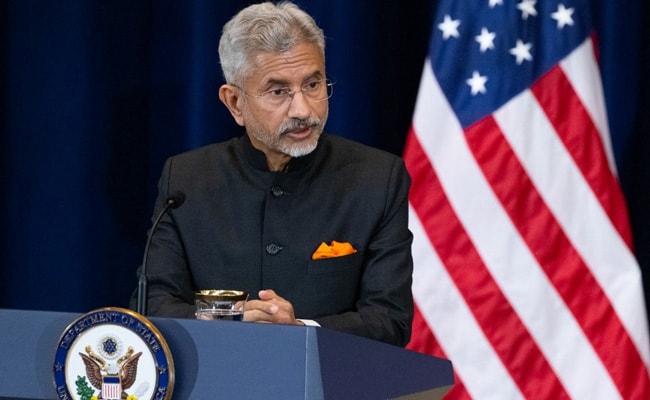 Mr Jaishankar said the Ukraine conflict is "not in anybody's interest".

Noting that India makes a choice about procuring defence equipment in its national interest, External Affairs Minister S Jaishankar today said where "we get our military equipment is not a new issue or changed due to geo-political changes" and that New Delhi has not faced problems in terms of spare parts supply in the past from Russia.

Addressing a press conference with US Secretary of State Anthony Blinken, Mr Jaishankar said India has a tradition of multi-sourcing defence equipment.

"Don't think we've faced any problems in terms of servicing or spare parts supply we've got in past from Russia. Where we get our military equip is not a new issue or changed due to geopolitical changes. We exercise a choice that is in our national interest," he said.

"We have a tradition of multi-sourcing and for us how to get the optimal deal from a competitive situation is really what this is all about," he said responding to q query on import of defence equipment.

Mr Jaishankar said the Ukraine conflict is "not in anybody's interest".

"The best way forward is to return to dialogue and diplomacy," he said, reaffirming India's stance.

The two leaders also exchanged views on Ukraine conflict and the Indo-Pacific region.

"We engage with each other in almost every domain and the quality of our cooperation in our conversations has steadily improved. We discussed our political coordination working together in plurilateral and multilateral formats and exchanging assessment and collaborating on the important regional issues and global challenges. I would specifically mention the Ukraine conflict and the Indo-Pacific situation in that regard," Mr Jaishankar said.

Russia had launched a special military operation in Ukraine in February this year.

In his remarks, Antony Blinken referred to remarks made by Prime Minister Narendra Modi during his meeting with Russian President Vladimir Putin on the sidelines of the SCO summit.

"I really want to emphasize on what PM Modi said, I think he captured, as well as anyone I have heard, fundamentally what this moment is about as he said, this is not an era, the time for war and we could not agree more," he said.

PM Modi, in his remarks during the meeting with Putin, had noted that India and Russia have stayed together for several decades.

"Today's era is not of war and I have spoken to you about it on the call. Today we will get the opportunity to talk about how we can progress on the path of peace. India, Russia have stayed together with each other for several decades," PM Modi had said.

"We spoke several times on the phone about India-Russia bilateral relations and various issues. We should find ways to address the problems of food, fuel security and fertilizers. I want to thank Russia and Ukraine for helping us to evacuate our students from Ukraine," he had added.

Mr Jaishankar also talked of the concern about energy prices among developing countries.

"Energy markets under stress must soften up. We'd judge any situation by how it affects us & other countries global south. There is a very deep concern among developing countries about how their energy needs are addressed or not," he said.

He also referred to "deep anxieties in the global south on fuel fertilizers."

Mr Jaishankar met with Antony Blinken earlier at the Quad meeting which saw participation from foreign ministers from India, the US, Australia, and Japan.

Speaking on the Sustainable Development Agenda the EAM said, "We must not let current developments jeopardize Agenda 2030 on SDGs or deflect us from climate action and climate justice commitments."

"We did a comprehensive stock-taking," the minister said.