Subhas Chandra Bose Jayanti: PM Modi will release a book 'Letters of Netaji' during an event in Kolkata today. 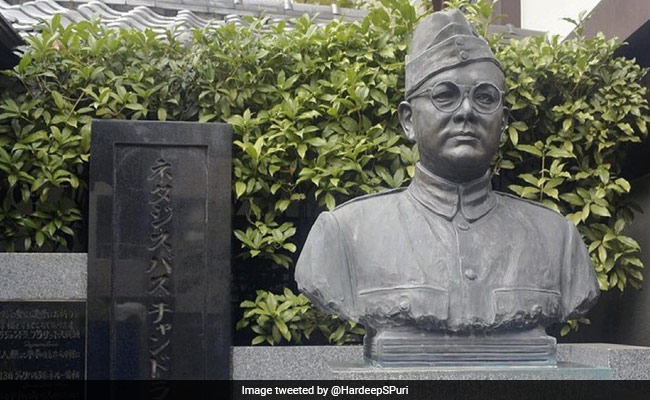 Netaji Birthday: The temple in Tokyo in which an urn of Subhas Chandra Bose's ashses lies.

"Tributes to Netaji Subhas Chandra Bose as the nation commences his 125th birth anniversary celebrations. It is befitting to celebrate this day as "Parakram Diwas" to honour his boundless courage and valour. Netaji instilled the fervour of nationalism among his countless followers," President Kovind tweeted, adding "we are committed to strengthen the spirit of freedom so strongly espoused by him".

Netaji is one of our most beloved national heroes who made extraordinary contribution to India's freedom struggle. Netaji's patriotism and sacrifice shall always inspire us. We are committed to strengthen the spirit of freedom so strongly espoused by him.

Prime Minister Narendra Modi, meanwhile, referred Netaji as the "true son of Mother India" and said the nation will always remember his sacrifice and dedication for its independence.

"Tributes to Netaji Subhas Chandra Bose, a great freedom fighter and a true son of Mother India, on his birth anniversary," the prime minister, who will be in West Bengal to address "Parakram Diwas" celebrations in Kolkata to commemorate Bose's birth anniversary, said in a tweet in Hindi.

"Netaji personified valour, determination and sacrifice," tweeted Vice President Venkaiah Naidu in his tribute to the freedom fighter and added that the nation will forever be grateful to Netaji for his enormous contribution in India's freedom struggle.

One individual may die for an idea, but that idea will, after his death, incarnate itself in a thousand lives. - Netaji Subhas Chandra Bose

"The courage and valour of Netaji Subhas Chandra Bose gave new strength to the Indian freedom struggle. He organised the youngsters of the country with his charismatic leadership under adverse circumstances. On the 125th birth anniversary of such a great hero of the freedom movement, I pay my heartfelt tributes," Mr Shah said in a tweet in Hindi.

The home minister, who is on a two-day visit to Assam and Meghalaya, also paid tributes to Subhas Chandra Bose in front of his portrait in Guwahati.

In his tribute, Aviation Minister Hardeep Singh Puri said that he has had the priviledge to visit Renkoji Temple in Japan where the revolutionary's ashes were interred. "Netaji's thoughts and ideals continue to guide us towards a confident & self-reliant future," Mr Puri tweeted.

During my days as a young political officer in @IndianAmbTokyo, I had the privilege of paying tribute to Netaji's legacy. The India Desk Officer of Gaimusho & I often visited Renkoji Temple where the revolutionary's ashes were interred & we thanked the priest who cared for them. pic.twitter.com/O1znakmOY6

Maharashtra Chief Minister Uddhav Thackeray paid floral tributes to the founder of the Indian National Army at "Matoshree", his private residence in suburban Bandra in Mumbai.

Meanwhile, PM Modi will release a book 'Letters of Netaji' during an event in Kolkata today. The final song followed at the event will be 'Subh Sukh Chain', the  anthem of the INA, which will be presented by Usha Uthup, Papon and Soumyojit, joined by singers like  Annwesha, Somlata and others.